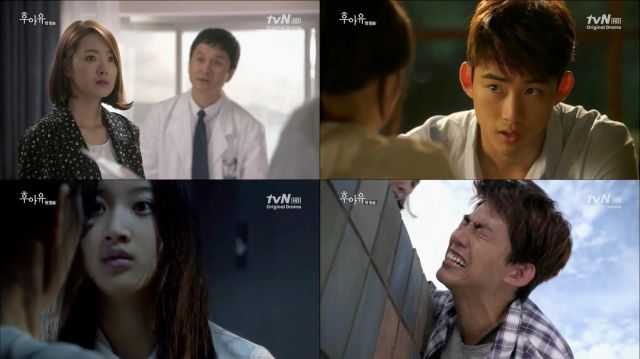 Within the first few minutes of this episode a police officer gets on a boat and repeatedly gets lost. He gets so lost, in fact, that the gangsters chasing him can't find him even when they just had the guy surrounded. "Who Are You - 2013" is one of those shows where spatial reasoning does not apply. Characters (and ghosts) can appear basically anywhere the plot needs them to, regardless of where they are or how difficult it is for them to get there.

Normally this kind of continuity problem drives me up the wall- however, "Who Are You - 2013" is so cheesy and absurd that I can't help but laugh every time it happens. Nothing in this show makes any sense, and trying to think about how any of this is accomplished just makes me laugh harder because trying to piece anything together logically just leads to more absurdism.

Take our lead character, Yang Si-On (played by So Yi-hyun). She gains the ability to see ghosts. It turns out that in this drama, ghosts exist mainly to vex and agitate Si-On. Like, the same way a kid brother would. I don't know what emotion So Yi-hyun is trying to communicate but normally she just comes off as "go away you stupid annoying ghosts agh!" The only possible motivation they could have for acting the way they do is to try and get a rise out of Si-On. And it's terribly amusing watching them succeed.

Metaphorically this is also reflected in her normal working life. Cha Geon-Woo (played by Ok Taecyeon) is a bit of an idiot. His hairstyle is terrible and he owns horribly dangerous and pointless props. He has about the worst demeanor I can think for dealing with a suicide attempt, and he annoys Si-On almost as much as the ghosts do. Fortunately, Geon-Woo is in a show where physical location and competence are not impediments to solving problems so he's not completely useless. The laughable ineptness still doesn't inspire much confidence, though.

I really love this show and I like the direction it's going. To be clear, though, I'm pretty sure it's not supposed to be a metatextual comedy. I think "Who Are You - 2013" is trying to be a serious horror mystery drama and is just doing a really bad job of it. But what difference does success and failure make anyway as long as it's entertaining? At the end of this episode, Si-On faces an apparently random dangerous situation that should be easily solved with her basic police academy training. The absurdity of this cliffhanger made me laugh at loud. But the real beauty of it is that the resolution is going to be just as ridiculous and I look forward to finding out what it could be.

"[HanCinema's Drama Review] "Who Are You - 2013" Episode 1"
by HanCinema is licensed under a Creative Commons Attribution-Share Alike 3.0 Unported License.