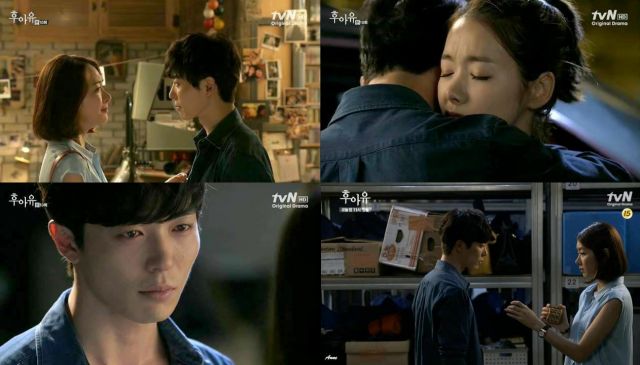 This episode isn't bad, exactly. "Who Are You - 2013" still has the good sense to contain its drastic narrative shifts in a single episode to avoid too much whiplash. So while the last one was goofy slapstick, this time around we get a much more serious episode as we learn details about the past relationship between Si-On and Hyeong-Joon, specifically hinging around the day Hyeong-Joon died, and the mystery of what's in that weird box.

The trouble is, the episode still contains what I now consider to be the main hallmark of every character- their basic incompetence. I'd actually wager that the characters in the flashback are even more incompetent than the ones we've been following this whole time. Remember that last episode we had gangsters who couldn't even figure out how to set up a competent ambush. This time the bar's even lower.

Hyeong-Joon practically provokes his own death by acting in a stupidly, unnecessarily aggressive way instead of calling for backup. This is especially weird because his relationship with Si-On is in such sharp focus, but apparently his top priority really is just making sure to catch all the bad guys in his dragnet. Hyeong-Joon's actions might make sense for some sort of supercop, but seriously dude, there's a whole mob of gangsters there. Just wait for backup.

Detective Choi, likewise, proves a rather questionable villain here. His original crime could have been avoided pretty easily by just trying to be more stealthy and discrete. His crime in the present is executed rather clumsily as well. The conflict as a whole feels really awkward because I can't recall ever having seen a narrative where boths factions are really bad at their jobs, and yet we're supposed to be viewing the situation in a light of genuinely sincere drama.

The main redeeming grace here that keeps the episode from feeling too weird is that there's this sense of balance. Because all the characters are at about the same level of competency, there's still genuine dramatic tension. While I thought to myself at points that these characters could have handled the sitation better, at this point I've pretty much accepted that they are who they are and that there's no constructive reason to nitpick them for being better police officers. The drama has been pretty clearly that they're not supposed to be particularly high ranked members of the police force, so I'm giving the drama the benefit of the doubt. For now, at least.

"[HanCinema's Drama Review] "Who Are You - 2013" Episode 10"
by HanCinema is licensed under a Creative Commons Attribution-Share Alike 3.0 Unported License.