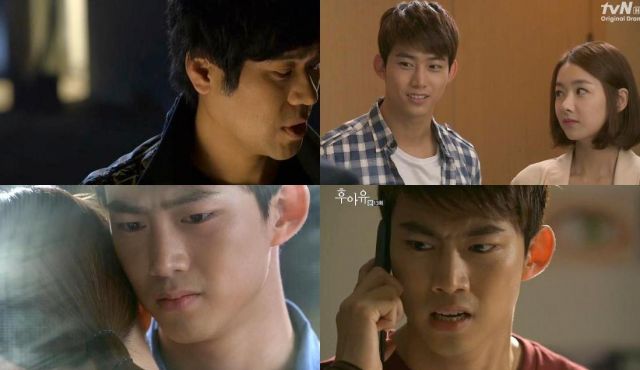 There haven't been many ghosts in the drama lately, but this time around we get a little more focus and explanation on Si-On's abilities. Appropriately, though a basically random accident caused by the bungling of one of her employees. I really don't know where this drama would be if characters didn't regularly screw up whatever simple tasks they've been given every now and then.

For those watching this drama streaming- there's a moment this episode where a character, who'd basically been allowed redemption earlier, attempts to do something very evil in flashback. This may seem offputting- the main reason this scene is in the drama is to provide a mini-cliffhanger for a commercial break. Also it lets us see more ghost powers. Yeah, it's dumb, but it's the goofy sort of dumb that inspires laughs, even if they're not intentional.

I think I've figured out why Hyeong-Joon is always talking to the spirit medium instead of just manifesting in front of Si-On directly and explaining stuff. The medium is his therapist. Or maybe drinking buddy? The difference is hard to tell, but I think if Hyeong-Joon had a corporeal body he's definitely need some booze. The guy just looks so constantly broken up and beaten down. Even for a dead guy.

And as it turns out this episode, he may have good reason to be. In a case of genuinely good writing, Si-on makes a discovery about the ghosts that has a lot of potential to wreck the storyline that's already been developed. Nothing about the gangsters, of course. I'm pretty sure that the gangster storyline can be resolved as soon as somebody remembers that assaulting and kidnapping police officers is against the law, and Geon-Woo and Si-On could both identify all the gangsters in a police line-up. No, this cliffhanger has the potential for much more interesting and difficult choices than that, and that's exactly what I need to keep going In Between poorly-planned fistfights.

"[HanCinema's Drama Review] "Who Are You - 2013" Episode 13"
by HanCinema is licensed under a Creative Commons Attribution-Share Alike 3.0 Unported License.