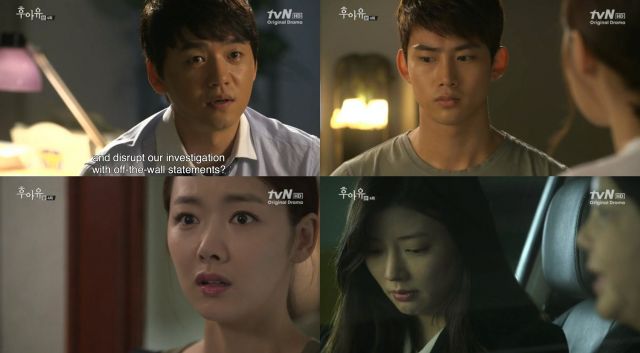 After an extended, protracted conflict that involves fistfights, knifefights, clubfights, and gunfights, we finally discover who murdered the poor chilly ghost who's been pestering Si-On. And it turns out...that it wasn't actually much of a murder at all. Legally speaking, I don't think the villain technically broke any laws. Well, I guess there's the shady guys in suits, the skulking around at night, the dismembering of the body, and the strange fixation with the suitcase, all that stuff was probably illegal somehow. But aside from that, there wasn't any real original crime to cover up.

Seldom have I ever seen a drama where so many people expend so much effort to accomplish so little. I think I get where Si-On is coming from now, though. Now that she's resigned to a life of being harassed by ghosts, Si-On makes the most of it by annoying other people as much as possible. She has mastered their art of provoking over-reaction. Just as Si-On is pestered into solving elaborate murder mysteries, other people attempt to attack Si-On just because she asks a few slightly rude questions.

I might expect that these crooks would hesitate at snuffing out a police officer, given that's exactly the kind of crime that would get the attention of cops more important than the ones that work at a lost and found. But then, maybe they don't think Si-On and Geon-Woo are real cops. Their outfits look like the kind of light police riot gear normally seen in video games about zombies. They don't look like cops at all. Which might be to their advantage if they ever wanted to go undercover somewhere.

Clearly this escalation can't go on forever. Even the characters are getting tired of these goofy forays. Si-On now just seems to expect that ghosts will show up randomly. She's still scared, and why not, even annoying ghosts can be pretty frightening. But this kind of attitude is starting to affect Si-On professionally. It's pretty inconvenient having to constantly second-guess whether nearby entities are real or paranormal when Si-On's job is supposed to require decisive action lest she become a ghost herself.

"[HanCinema's Drama Review] "Who Are You - 2013" Episode 4"
by HanCinema is licensed under a Creative Commons Attribution-Share Alike 3.0 Unported License.