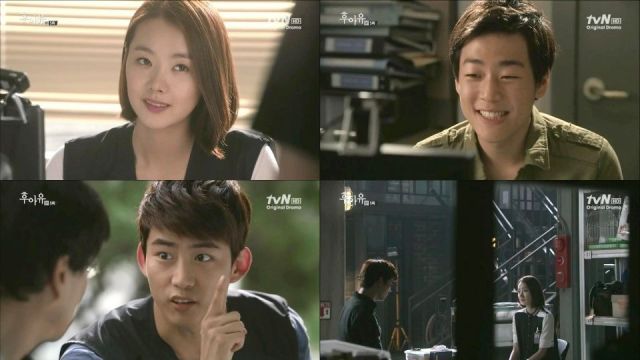 There's something nearly artistic about the screenwriter's insistence on making sure that every single plot event and character in "Who Are You - 2013" connects to everything else somehow, regardless of whether it makes any kind of logical sense. It's not even an idiot plot- the story feels like a divine hand is specifically manipulating people to do weird stuff for no reason just to set up whatever's going to happen next episode. Accept that conceit, and the characters are almost behaving somewhat intelligently.

The annoying ghost this time around isn't scary, but he has an astonishingly bad sense of timing. Where the other ghosts had the sense to terrorize Si-On in private and be pretty clear about what they wanted, the new ghost just does the same annoying actions repeatedly while Si-On is in the room with other people. The look on her face make it clear that she just wants to smack this guy, if only because it's just plain illogical that no one else can hear him this time.

Ghost rules are getting harder and harder to figure out. The ghosts manipulate their environments exactly the same way real human beings would, except when they don't. Possibly this is because they don't always remember that they don't, and have created a small field of alternate reality immediately around themselves which causes all mechanical objects to respond as if they were still alive through the sheer willpower of undead belief. Or maybe it's just too inconvenient for the cast and crew to use the special ghost effects all the time. Whichever floats your boat.

The characters at this point are not only completely unprofessional, but unpersonal, too. That's probably not a word but I don't know what else to call it. Geon-Woo's ingenius plan to find out how Si-On knows so much weird stuff is foiled because he apparently doesn't remember what usually happens after he drinks beer. One of the subordinates has told an elaborate, easily disproved, and pointless lie and, I really have to wonder, what did he think was going to happen? How long did he think this relationship was going to on without her ever noticing the deception? The mistake he makes is so elementary that I have to wonder how whether he or any other character in this show has ever tried to do anything sneaky, ever.

As a final note, this episode gets the prize for goofy, unconvincing plot twist. The drama takes the question that no one ever asked, and gives us the answer we never would have expected. I don't mean that it's surprising, I mean it's such an irrelevant revelation but it's delivered as if it's this profound character building moment. And the invisible hand guiding this drama went to so much trouble to set it up, too. But hey, I can't be too mad at a narrative development which involves Geum-Woo picking a fight with four guys just for the heck of it.

"[HanCinema's Drama Review] "Who Are You - 2013" Episode 5"
by HanCinema is licensed under a Creative Commons Attribution-Share Alike 3.0 Unported License.