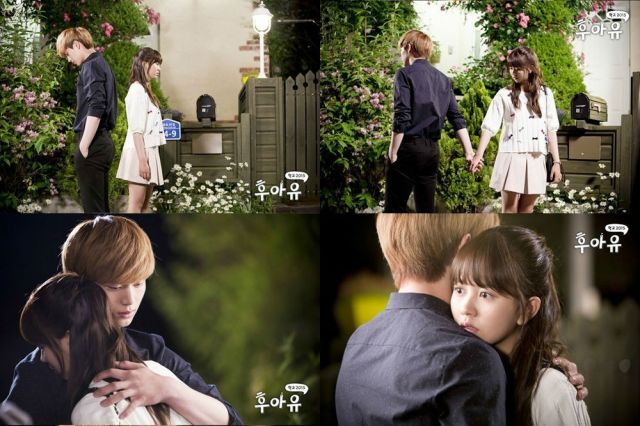 It's hard to imagine what "Who Are You - School 2015" was like without Eun-byeol's presence. She's just such a fascinating duality with Eun-bi. Seeing the way Eun-byeol reacts to any daily inconvenience it's rather inescapable that the young woman has strong aggressive tendencies. To some extent this is good- Eun-byeol doesn't need a knight in shining armor like Eun-bi did. She can solve problems quite effectively on her own. Yet this makes Eun-byeol a very unsatisfying person to know on a personal level, because she is so independent it's nearly impossible to help her.

As is well noted here, Eun-byeol is the one who's always been cold and unresponsive with I-an. It's unsettling thinking back to Eun-bi, and how easily I-an fell into line as a protector. He only even really got mad when Eun-bi tried to dispel the illusion that she was Eun-byeol. After everything that's happened Eun-byeol is still trying to resolve her emotional problems alone. It's heartbreaking watching Eun-byeol break down, but it's even worse realizing that Eun-byeol is the kind of person who would rather run an elaborate scam than admit to any kind of personal weakness.

On that note I don't think "Who Are You - School 2015" can really escape its own elaborate absurdity at this point. Even though Eun-bi keeps talking about making things right the drama keeps stalling on having her truly come clean. This much is annoying because the younger twin has engaged in her own deceptions, and Eun-bi knows full well that just because she had good intentions didn't justify traumatizing her friends.

This does lend a certain sweetness to the scenes at the orphanage. Eun-bi has always been unconditionally there for the orphans, so of course they would offer the same level of compassion to her. For duality's sake, again, Eun-byeol has had all sorts of advantages, yet she's incapable of coming to terms with grief and remorse. The twin sisters separated at birth really are different in ways that can only be explained by their upbringing.

It's an angle I wish would be more greatly explored. Unfortunately there's only enough time left in "Who Are You - School 2015" at this point to really finish up with the main plot. That, and there's also a sort of basic absurdity involved Kim So-hyun acting against herself. After a certain point the camera tricks would get a little cumbersome. Even so, there's easily enough depth in the drama at this point to justify a strong payoff, even if the emotional intensity isn't quite what it was in earlier episodes.

"[HanCinema's Drama Review] "Who Are You - School 2015" Episode 14"
by HanCinema is licensed under a Creative Commons Attribution-Share Alike 3.0 Unported License.