[HanCinema's Drama Review] "Why Her?" Episode 9 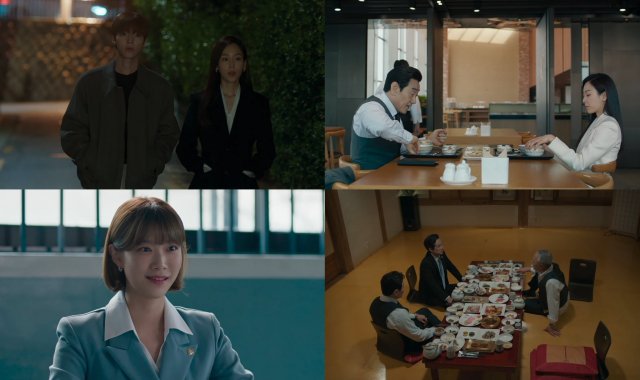 Soo-jae is exonerated of the charge of bullying nightcub owner Seok-dal into murdering his employee So-yeong. There's surprisingly little overall fallout from such a big story, with Soo-jae continuing most of her legal work as usual. She even seems to come to a settlement on First Son Choi's divorce, in a scene that's presented so matter-of-factually that I was left wondering whether Soo-jae was actually as emotionally invested in the situation as I'd previously assumed.

A lot of the plot in "Why Her?" remains murky and ambiguous. Perhaps the most interesting twist is Chairman Choi grumbling about how disgusted he is by the two other powerful old guys with whom he's the co-antagonist. This all suggests that Chairman Choi really is only looking out for himself and willing to destroy quite literally anyone to further his goal of almighty political power. Soo-jae's hypercompetence at least makes her respectable in that regard, if only because she cleans up after herself.

Soo-jae's one weakness is increasingly Chan. Second Son Choi finally gets a chance to be useful as he's able to warn Soo-jae that even if she could talk her way past the law school with the usual combination of technicalities and bribes, her new living situation is unusual enough that Chairman Choi is starting to think that Chan is worth investigating. I'm also belatedly left wondering if Chan is right that the murder of his stepsister was also, somehow, a part of this greater conspiracy.

The narrative in "Why Her?" dangles plot points like this a lot, and I'm not especially confident at this stage that all of these issues will have satisfactory explanations. While the law school clinic is constantly talked up, we don't really see much actual work going on there in the form of episodic cases or that sort of thing. We see even less time of Soo-jae actually giving lectures or doing any real work there.

With so much of the actual screentime divided between Soo-jae doing work for the firm, investigating her blackmail schemes, and the romance with Chan, I feel like a lot of the story is just being lost in the editing here. What we get isn't bad, it just feels kind of abridged. There's also the nagging issue of how Soo-jae falling in love with her student actually is a pretty serious ethical issue, and I feel a bit uncomfortable that the writing feels like it will inevitably turn her into a martyr.