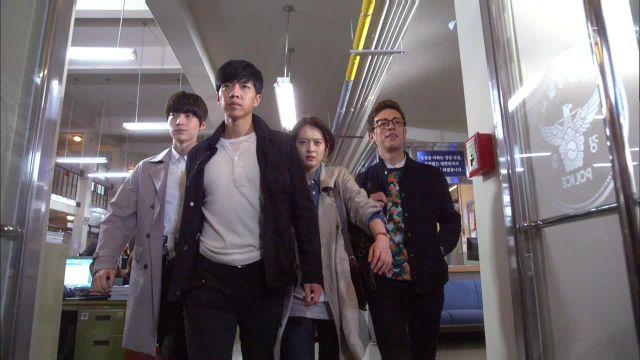 "You're Surrounded" started off strong, boasting of a great child cast, a fast-paced opening, and a quick, breezy introduction of all the main characters. There were two general moods: humorous, and dark. While both were well set as isolated scenes, the combination was a bit incongruous.

The four rookies in the present have had a brief introduction, but not much else. Most of the episode was spent on the back story of leading rookie Eun Dae-goo (Lee Seung-gi as the adult and Ahn Do-kyu as the child), which included female rookie Eo Soo-seon (Go Ara as the adult and Ji Woo as the child). Their childhood contained a bit of a love/hate romantic line, but most of it was spent building towards Dae-goo's tragic loss of his mother. It's moving, but it is nothing terms as far as dark and pained drama leads are concerned. Cha Seung-won's character, Seo Pan-seok, is also involved and we get to seem him mature from a bumbling rookie in Masan into a leader in the Gangnam precinct.

The opening sequence of the drama was by far the most entertaining and the one that fit least with the rest of the episode. It featured an intense, yet very silly, car chase set against a backdrop of Seoul traffic and Blues Brothers-esque scoring. It contained the slapstick humor I expected of the drama. Some of the same vibe was brought back near the end as the rookies gather at the precinct for the first time, setting out on the epic car chase that opened the show. It is then that we formally meet the majority of the main cast.

I find that the tone of the present versus that of the flashback do not mesh well. It was jarring going into and coming out of the flashback, which contained a little humor, but not enough to match the full blown comedy of the adult cast.

In terms of interest, however, the show has a lot of heart. It's hard to go wrong with a kid who lost a parent and who seeks revenge. At least I'm assuming that the kid, Dae-goo, will seek revenge and that's why he morphed from a jovial kid to a brooding adult. I do like that he suspects Pan-seok in his mother's murder, which wedges a big wrench of tension and resentment between them.

As for how this show will turn out, it could either be great or fail horribly. With writer Lee Jeong-seon ("Ojak Brothers") at the helm, I'm hoping it will be strong. Writer Lee needs to even out the tone throughout the episode, but the emotional moments are spot on.