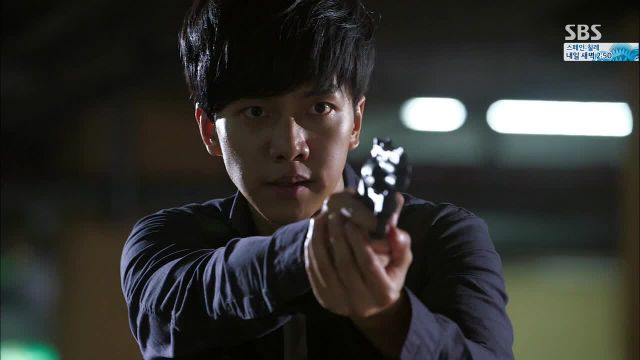 This episode is about realization and understanding, or the lack thereof. Secrets are out, but they are no easier to deal with. Unlike in the past, however, the characters no longer have to deal with the hardships on their own. They have to get used to friendship, but its a heartwarming journey.

When Dae-goo is severely injured by the man who killed his mother, he is hospitalized and in need of aid to perform daily functions. It is then he sees how much his fellow rookie's care for him as they selflessly help him get through his day. There is a slow realization that creeps over Dae-goo as the episode progresses that is beautifully portrayed by Lee Seung-gi. This realization opens up Dae-goo a little more although not enough to quell his dangerous thirst for revenge. Pan-seok makes a very relevant point when discouraging Dae-goo against revenge: the moment he commits violence against his mother's murderer he morphs from victim into a perpetrator and his beloved, deceased mother into the mother of a criminal. It's a universal lesson even though it's aimed at Dae-goo.

Although this story is fairly typical K-drama fair, what makes it good is its relatability. The situations garner sympathy, the good guys earn pity, and the bad guys are both scary and understandable. The bad guy, Assemblyman Yoo (Jung Dong-hwan) behind all the villainy in the world of "You're Surrounded" is still currently a very black-and-white (and therefore a rather boring) character. He is a selfish politician who manipulates those below him to keep his underhanded climb to the top a secret. His underlings are the more interesting bad guys. Chief Kang uses her connection to Yoo to create positive changes in the police force. Her intentions are good, but her methods are tainted. The juxtaposition is what makes her interesting. Even the booted man who killed Dae-goo's mother has a backstory that prevents him from becoming a total monster.

The ending of this episode was noteworthy because it smoothly incorporated Dae-goo's need for revenge and the trauma he suffers from watching his mother die. Dae-goo strikes out on a mission of revenge and is thrown into a situation that parallels the night of his mother's death. The scene was skillfully choreographed and filmed so that it was fraught with tension. It didn't beat the viewer over the head with metaphors or too many flashbacks.

"You're Surrounded" has fallen into a steady rhythm that is both comforting in its familiar gait and unpredictable enough around the edges to maintain viewer interest.