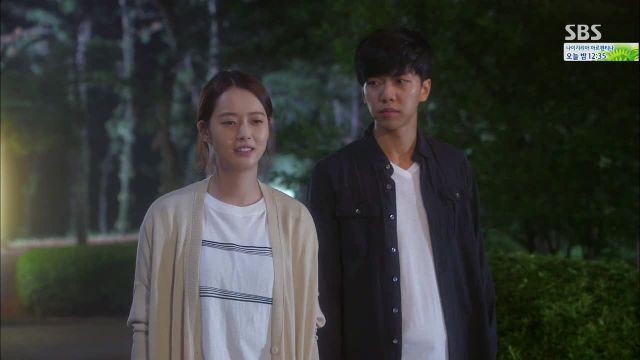 "You're Surrounded" is a character driven story that makes wonderful use of the plot to bring out the best, and the worst, of the characters on screen. It addresses the situations that bring people closer and highlights the beauty in human connection. It also shows how the darker aspects of human nature can snowball into something terrible.

While the plot of "You're Surrounded" is not the most inspired plot to grace the small screen, the way it is constructed gives clear motivations to all characters. It makes them all easy to understand, to empathize with, and to hate. Assemblyman Yoo is no longer just a villain - he is a villain with very clear reasoning behind his actions. Yes, he is selfish, but he is also a father of an equally selfish daughter who he wishes to protect. That parental aspect makes him much more interesting than what he was before - a run-of-the-mill narcissistic politician. His daughter is a villain of the nastiest variety. She is selfish and protected by money and power. Growing up with that money and power shaped her into the kind of woman who would beat another and shirk all responsibility.

The father and daughter pair make for an interesting obstacle for the rookie detectives and their leader, Pan-seok, because they fight dirty, in a way that happens far too often in this world and is difficult to stop. And, just as Assembleyman Yoo fights for his family, the situation it causes brings the makeshift family of detectives and Soo-seon's mother together into a unit that supports each other with love, consideration, and loyalty. This makeshift family was the highlight of the episode. Soo-seon's mother was unjustly treated and her new family rallies around her to lift her spirits and bring her case to justice. It is what each person in the group needs for one reason or another and that's what makes "You're Surrounded" a powerful drama.

There are a few other relationships worth note. Primarily that between Pan-seok and Hyung-cheol, Pan-seok's former partner and the man who murdered Dae-goo's mother, and that between Tae-il and Sa-keyong. The former is a relationship on the mend that is bringing Hyung-cheol back from his resignation that he is a horrible person. While he did horrible things, he still has a chance at redemption, which is a clear message. "You're Surrounded" loves its moralistic messages. The second relationship is the awkward, but strangely comfortable, friendship between Tae-il and Sa-kyeong. I'm not a fan of this relationship. But more than that, Tae-il told her his story and she is helping him to overcome his strict family, their expectations of him, and their disapproval. In essence, people need healthy relationships to heal and grow. Another message, but a good one.

"You're Surrounded" hasn't lost its humor although it is a lot less frequent. One minor character makes reference to the events in the show and declares that such events would only ever happen in a terrible drama. This kind of meta joke is often used, but has lost its effectiveness. What makes this usage of it funny is that the character rails on about it for nearly a minute. The show also makes good use of the tensions between Pan-seok and Dae-goo for some humor, bringing out Dae-goo's stubbornness. It's awesome stuff.

"You're Surrounded" is a good drama. I'm having fun watching it, writing about it, and I'm looking forward to the rest of its run. Keep it coming, show.