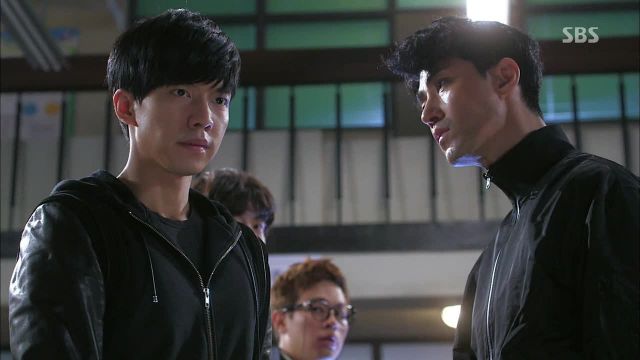 "You're Surrounded" is a fun show. While it has a few serious themes, most of the interest lies in the satirical social commentary and slapstick humor. The show falters when it attempts to venture into deeper explorations of characters and issues. It doesn't handle the overlap of serious and light-hearted well. Still, it's a good hour of fun

Both Pan-seok and Dae-goo have a shared dark past that keep them from fully immersing themselves in the comedy that pervades the rest of the show. There were a few times where the humor mixed well with the darkness haunting the two men, but it was in the first episode. In this second episode, the comedy detracted from their issues, but the comedy remainedstrong.

What this show does well is mocking the flaws in South Korean society. For example, the police station in Gangnam is ratty, but the people in it have "Gangnam style" The people dress well no matter their financial situation, including the officers. Other stereotypes happen, like the handsome officers being treated like idols by a gaggle of school girls and the officers eating up the attention.

The rookie officers are amusing as they work the high stress job of being rookie detectives in Gangnam. They each embody a personality stereotype: Ji Gook (Park Jung-min) plays the country bumpkin sticking it out in the city. Park Tae-il (Ahn Jae-hyun) is the Gangnam style rookie who is good with the ladies. Eo Soo-seon is the woman from a small out to prove her gender and herself. Eun Dae-goo is the man with a past. He is the straight man to a team of funny men. While the other three act out, Dae-goo calmly watches and keenly observes. I do like that he is far from perfect despite his standoffish attitude. He makes as many rookie mistakes as the others - he just compensates for them better.

Pan-seok has to learn to deal with his rookies and his biggest obstacle is remembering his past and the days when he was a rookie. He made a mistake that made him the " legend " detective he is today - he failed to protect Dae-goo's mother and she was murdered. I like that the responsibility stayed with him, and that Dae-goo doesn't realize it. Rather, he suspects Pan-seok of killing his mother. It's a great twist and the antagonism between them makes for some great television.

Currently, there aren't too many politics flying around, but I have a feeling it'll become more integral to the story and much more annoying. Already the higher ups and the ladder climbers are the self-serving types who become tools of the writer to cause problems rather than genuinely important parts of the story.

Lee Seung-gi needs to be praised for his acting. While everyone else needs to bring the comedy, he needs to do the heavier work. His character has changed his name and his accent to disguise himself from Pan-seok. He relives his mother's death, visit her her grave, and has to remain dark against everyone else's levity. There was one moment, when he visits his mother's memorial and drops the Seoul accent for his native Masan accent. His entire facade falls away, and he is the vulnerable young teenage boy who violently lost his mother and yearns for her. It was masterful acting.

Despite it's weaknesses, "You're Surrounded" is a show I'm looking forward to watching. I want to see how it plays on all of the plot threads it has begun.