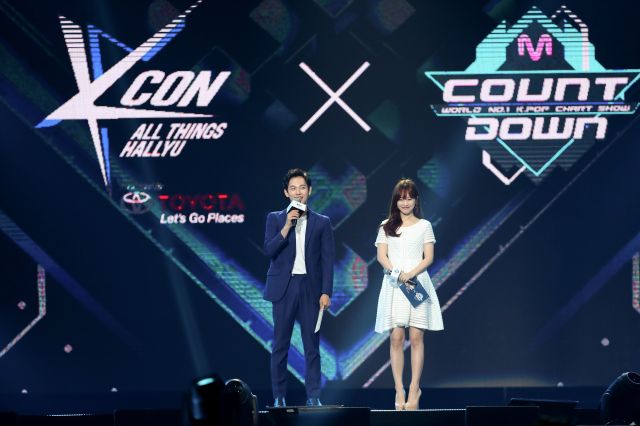 The second year of KCON New York held June 24 and June 25 at the Prudential Center shaped up to be an incredible event that attracted 42,000 Hallyu fans, nearly two and a half times as many fans as its inaugural year of 17,000. Half of the fans in attendance came from outside the New York metro area. Not only did fan numbers swell, but the convention enjoyed double the sponsorship, over ninety booths, and triple the workshops and panels. HanCinema was on two of those panels and will also participate in panels at KCON LA July 29 through July 30. We also visited many of the booths at the convention and have fantastic, high-quality beauty items for giveaway. Check out the giveaway instructions at the bottom of this list of highlights to learn how to enter! And don't worry, you will have more chances to win Korean beauty products! Keep following our KCON New York coverage to find out more!

And now, without further ado, here are the top 8 highlights of the KCON New York 2016 Convention of all things Hallyu:

Concert Highlight #1: When BTS set the stage on "Fire" 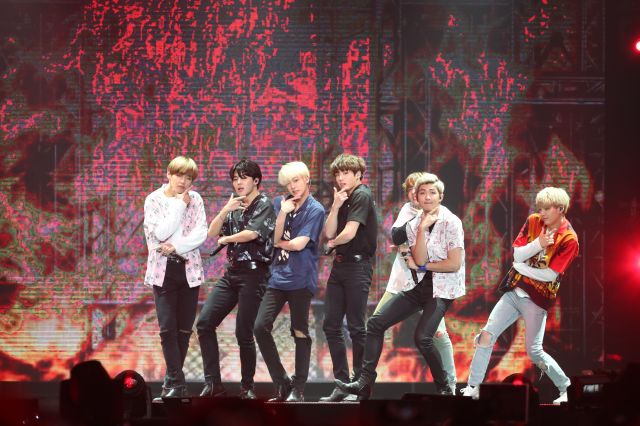 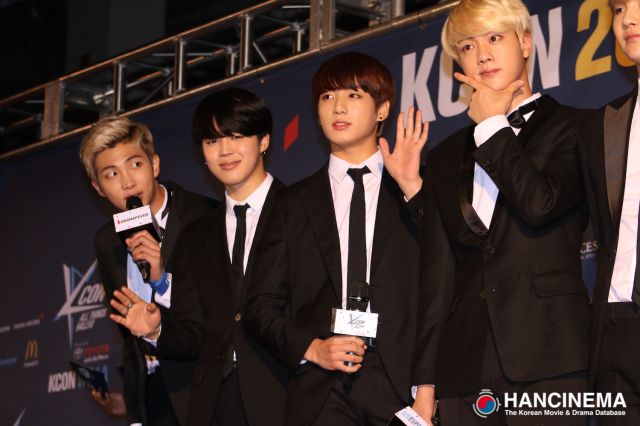 When the onstage screens began to flame in preparation for headliner BTS and their recent release "Fire", the Prudential Center went wild in anticipation for Big Hit Entertainment's popular septet. Jin, Suga, J-Hope, RM, Jimin, V, and Jungkook coolly entered through a trap door in the center of the stage and quickly heated up the stage with their energetic presence, sending a thrill through the crowd that was both audible and tangible. Hard-hitting, intricate footwork, rapid-fire rapping, a catchy hook, and a belted melodic line make the song and its performance concept immediately addictive. Despite the fact that the Prudential Center was filled with mostly English-speakers, the crowd sang along in Korean, transcending language and culture for the love of K-pop. 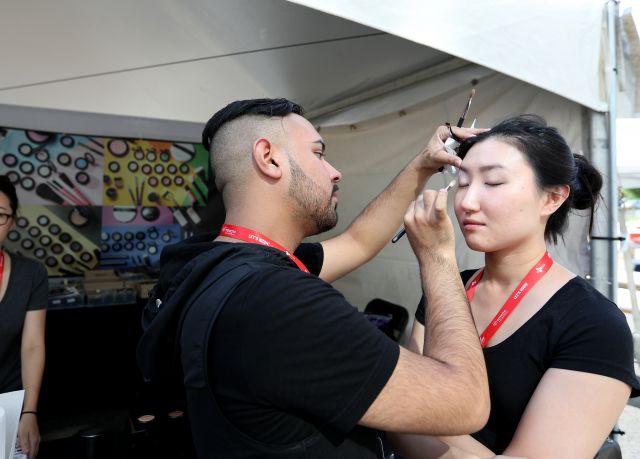 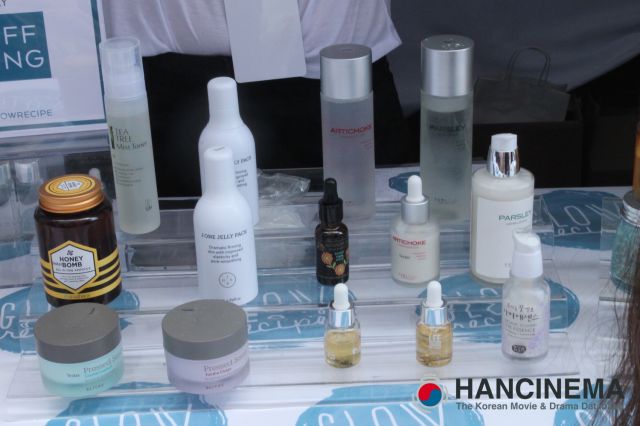 Over ninety booths lined the outside of the Prudential Center and many of those were Korean beauty booths. Many KCONners roamed from booth to booth over the course of the two day Hallyu convention and went home with a fully-loaded beauty haul. HanCinema visited many of these booths and now we have samples of product from MustaeV, Blossom Jeju, The Face Shop, Duft & Doft, and E Nature for giveaway! Make sure to see below for entry details. Many of the booths performed complimentary makeovers and had many products for sale and for order. Korean beauty is one of the biggest imports of Hallyu and with all of the product available to test and try at KCON New York, it was easy to see why. 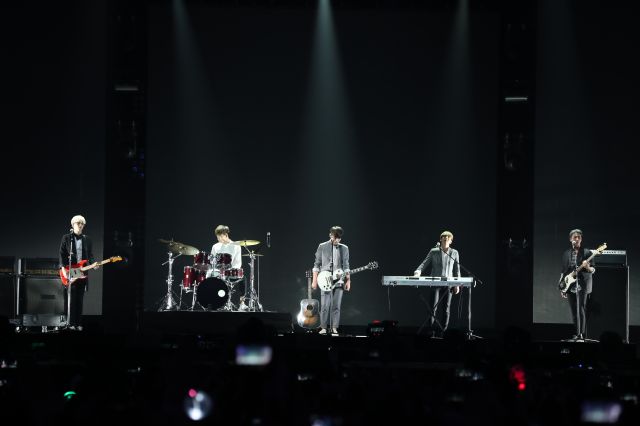 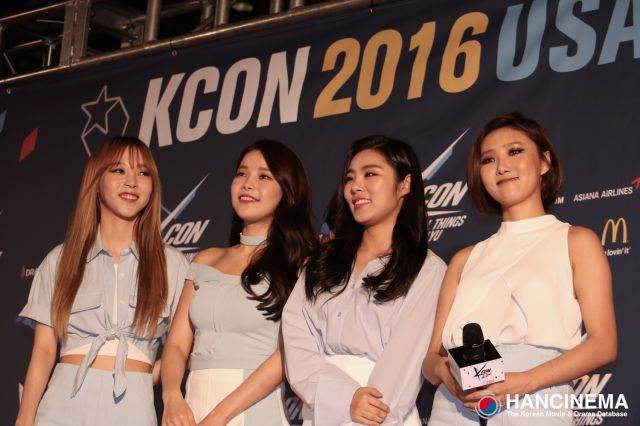 Day6 is a group of talented instrumentalists, singers, and rappers who represented Korean bands on the Prudential Center stage. For their last song, they did a string of K-pop covers and were joined by Mamamoo for a cover of the Wondergirls' "Nobody" that was packed with rich harmonies and complex instrumentals. Quartet Mamamoo is known for their vocal prowess and harmony-work, and that skill set perfectly blended with the highly technical playing of Day6. 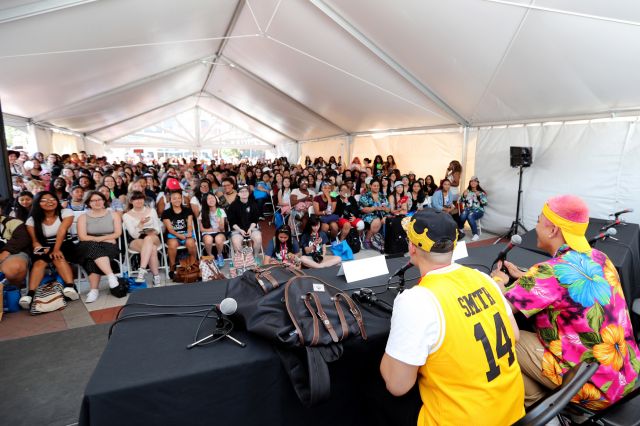 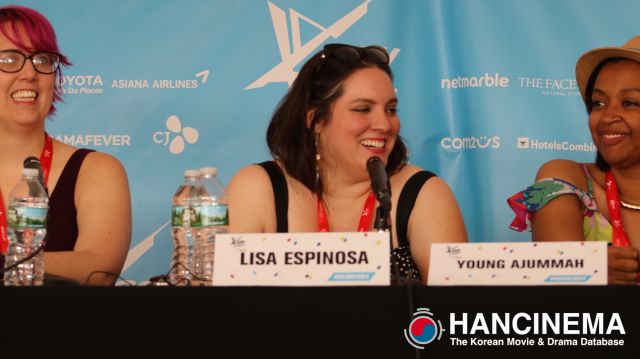 Triple the panels and workshops from last year were hosted at KCON New York and gave fans so much to do during the convention portion of the two-day event. HanCinema participated in "The Return of the Secret Live of K-pop Fans Over 30" panel that represented about 25% of the fan population present, and "From K-pop Fan to K-pop Professional" that had panelists from all over the field of Hallyu journalism. Several hot panels included "All About the KCON 2016 Lineup", "How Do You Do Hallyu?", "The Evolution of K-pop", and "How To Create Your Own PodCast". Workshops on cooking and dancing were jam packed and fans had tons of fun with the Nutty Nomads as they played K-variety games. All of these activities and more took place from 11 A.M. to 6 P.M. each day. The two panel tents were packed all day and fans and panelists interacted enthusiastically, connecting over their passion for Hallyu. This same passion coursed through the veins of the entire convention. As Jeff Benjamin of Fuse says, "K-pop is not a genre. It's a scene". This is true for more than K-pop - it expands the entire wave of Hallyu and the panels and workshops showed that. 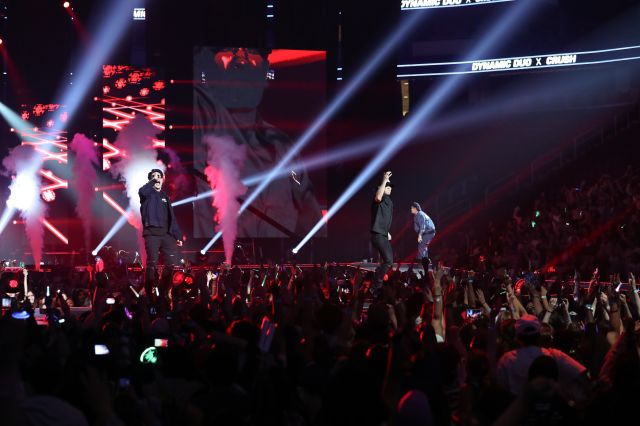 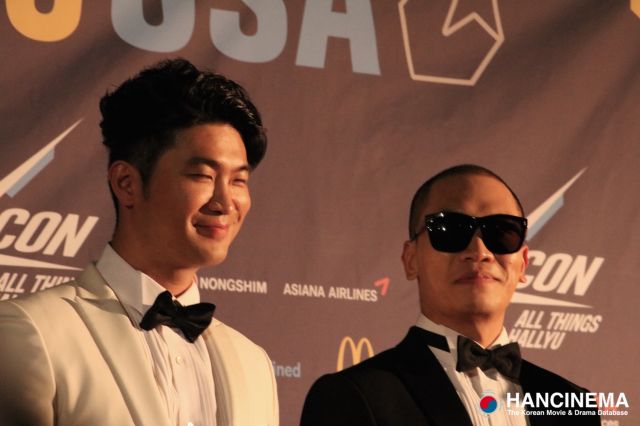 Dynamic Duo dominated the stage with their enthusiasm and stage experience. These two gentlemen with more than their fair share of swag had as much or more energy than their younger counterparts. When young Crush joined them on stage, it was an explosion of energy that needed nothing more than the trio of men and their microphones to get the Prudential Center on their feet and cheering. Crush's smooth vocals blended well with Dynamic Duo's unique and complex rhyming patterns. 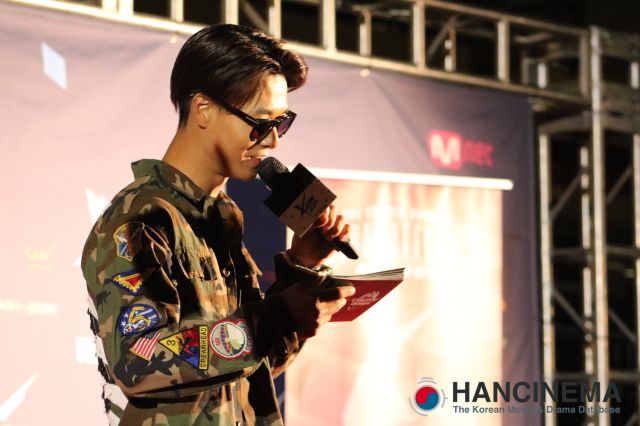 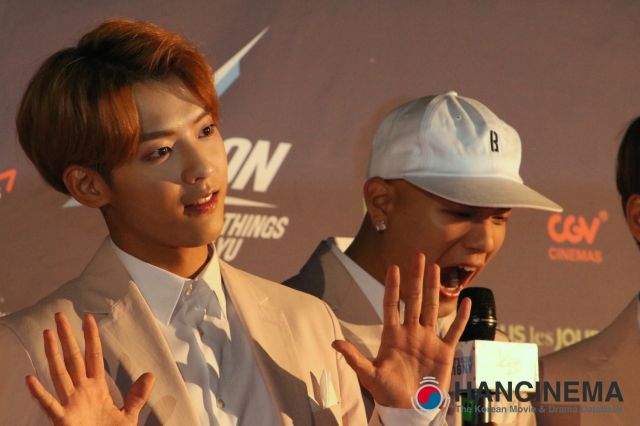 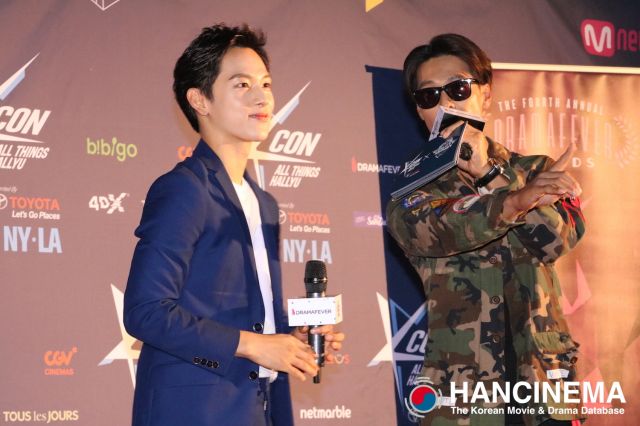 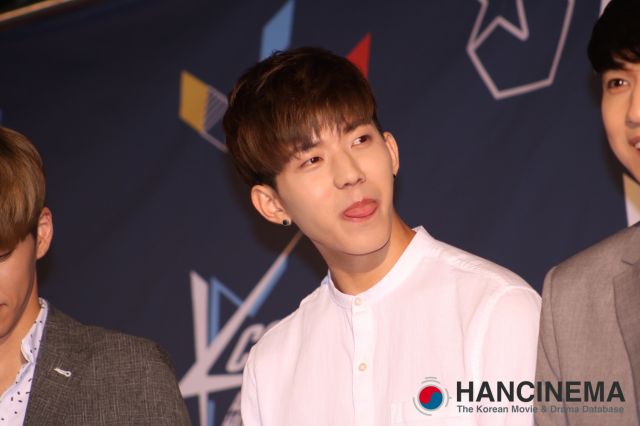 What KCON would be complete without a glamorous red carpet full of beautiful, talented Korean stars? Host Danny Im took to the red carpet both nights to introduce and interview the K-pop groups, soloists, and actors who traveled to be with and perform for their fans. June 24 saw enthusiastic Seventeen, collected BtoB, suave Im Si-wan, cute Park Bo-young, crooner Crush, cool Dynamic Duo, and Jersey native Ailee. Each group, soloist, and actor addressed their audience in English as well as in Korean, which made fans go wild. Actor Park Bo-young ("Oh My Ghostess", "The Silenced") dressed in an adorable white lace dress received the Dramafever award for Best Actress while on the red carpet, which was a special moment for her and her doting fans. The second night saw Mamamoo, Eric Nam, Day6, and BTS grace the red carpet. Mamamoo were graceful and genteel, belying their high-energy stage personas. Eric Nam literally jumped around on stage, chatting up Danny Im and sending love to the crowd. Day6 was full of smiles as the sole band in the lineup. BTS was greeted by a roar of cheers and were very excited to get on stage. 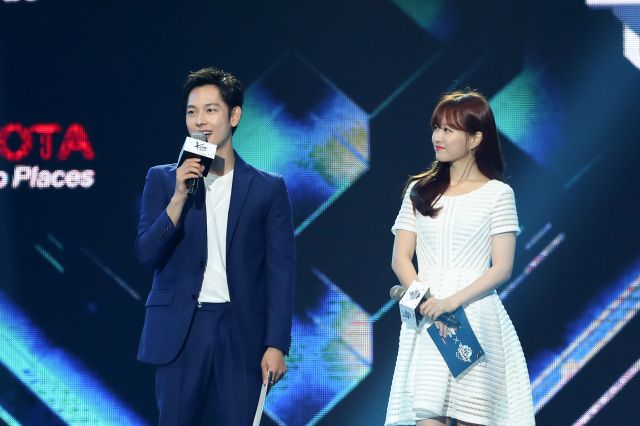 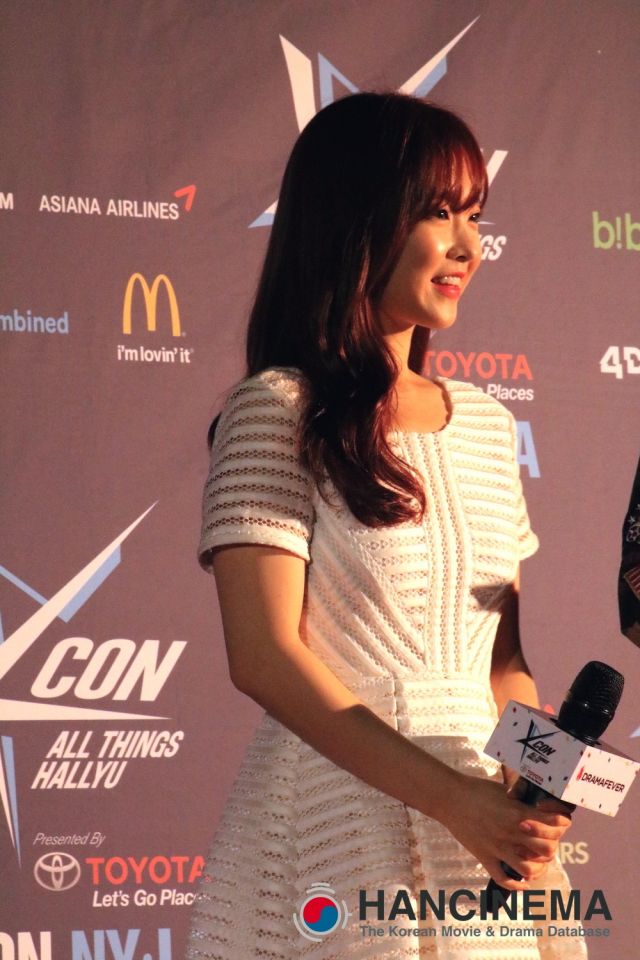 During the first concert, actors Im Si-wan ("Incomplete Life", "A Melody to Remember") and Park Bo-young came on stage to MC for M Countdown. Im Si-wan was handsome and dapper in his suit, and Park Bo-young was lovely and youthful in her white dress. But it was their English that won over the crowd. Although a tad stilted, the two talents spoke in the mother tongue of most of the KCONners, which was very much appreciated and well-received by the massive audience in the Prudential Center. Their efforts are a small example of the wonderful cultural exchange that the Hallyu wave promotes through language, food, music, culture, and beauty. 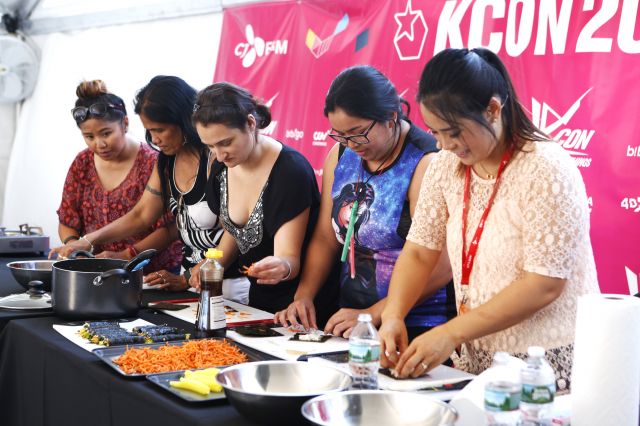 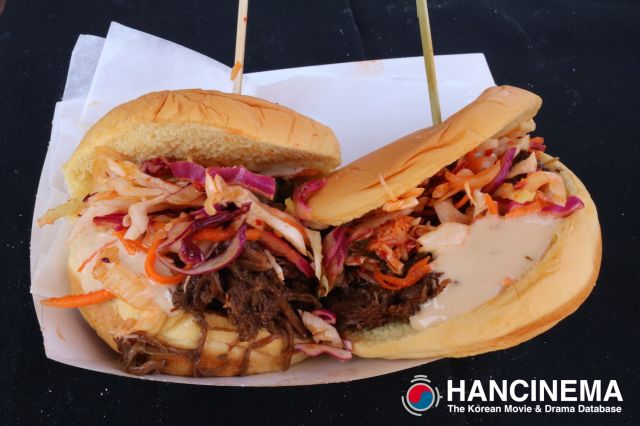 The biggest export of the Hallyu wave is Korean food and there was plenty of food to be had. Food trucks and stands lined the pavement just outside the Prudential Center and the convention proper. KCONners roamed the convention with nibbles and treats in hand and the smell of the food was wonderfully enticing. A few non-Korean trucks were present, but fans lined up for ddeokbbeokki, bubble tea, japchae, mandu, kimchi tacos, bulgogi sliders, ramyun and more at places like the Shin Ramyun tent, Mokbar, Tous Les Jours, My Four Suns, Bibigo, Korilla, and Tea and Milk. HanCinema indulged in many of these and ate very well during the course of the convention. 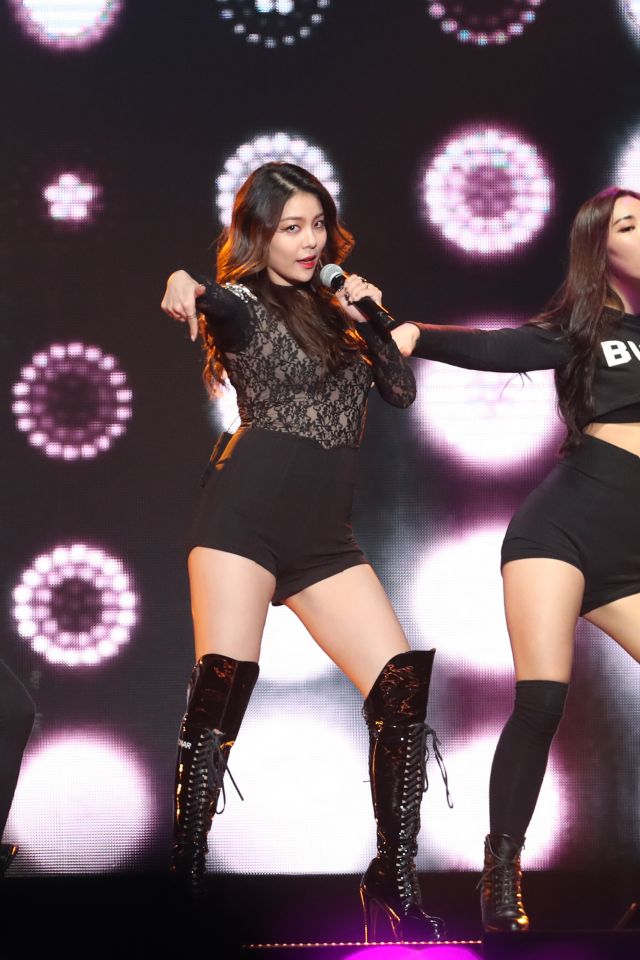 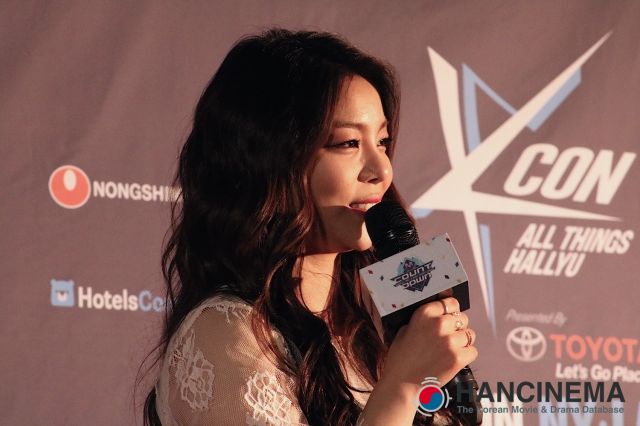 In the middle of her first song, "Mind Your Own Business", Ailee was met with a huge surprise: her back track cut out. Such moments are pure terror for performers, but they also test their mettle. Ailee proved herself. She took a breath and continued to sing. Her huge voice filled the stadium as she invited the audience to join her in finishing out the chorus. Her four backup dancers grooved to her voice and struck a dramatic pose when the chorus was over. Then Ailee adorably asked the audience to pretend the malfunction never happened, and went back to her starting position to begin again. And then she killed it. Again.

We have some amazing beauty products for giveaway from MustaeV, Blossom Jeju, The Face Shop, Duft & Doft, and E Nature. We will be having three giveaways and seven opportunities to win over the next three weeks. This first giveaway is comprised of one goody bag that will be made up of mystery pairing of the products in the pictures. Please follow the directions below to enter and win!

Written and photographed by: Lisa Espinosa AKA Raine from 'Raine's Dichotomy'