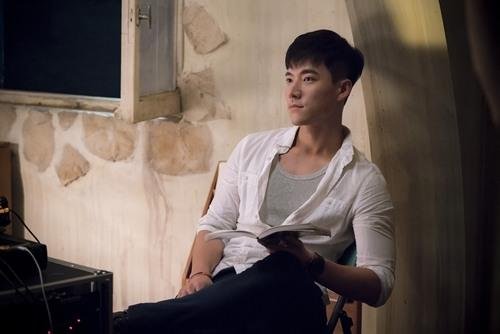 Hello HanCinema fans! I am so pleased to bring you our interview with Jasper Cho, the talented young actor who just finished an amazing run as Dr. Daniel Spencer in the hottest drama of the year, "Descendants of the Sun". Thank you to all of you who asked questions. Please read on to find out which two lucky fans had their questions answered by Jasper and to see what he had to say about working on "Descendants of the Sun", how he broke into the industry, and much, much more!

HanCinema: How did you first get into performing? Was it through music? You are active on Youtube and you participated in "Superstar K". Did that help you break into the Korean entertainment market?

Jasper: I've always been doing music as a hobby. Clips on internet are those with my past band members. "Superstar K", completely out of the blue, reached me via Youtube message that year. And I thought it could be a good experience, though I had never thought I'd be a professional singer, and I still not. It was a good experience amongst all those extremely talented guys. Breaking into the acting industry was a completely different story.

HC: Because you are so multi-talented, where do you see your career taking you? Thus far, it has brought you from Canada to Korea, which is quite a long ways to go!

J: Moving from Canada to Korea certainly was a long way. I've always been a globe-trotter, in some sense. I still think this is a great way to live life to the max, if you can. Career-wise, I'd love to do anything that can express my ideas in creative ways. That includes advertising and acting, of course. But there's only so much you can do on a daily basis. I will do what I can, what's given, right in front of me.

HC: How did you land the role of Daniel on "Descendants of the Sun"?

J: The assistant director and director of "Descendants of the Sun" messaged me on my social media completely out of the blue. I was suspicious of this. Who reaches actor for casting via social media, you know! But back then I didn't have an agent, so they found me so. They probably have seen me on TV in the past or someone recommended me. They thought I could be a good fit for the role. Whichever was the reason, I was very very grateful, and went to see them for audition several times. They went radio silence for a few weeks at times, and towards the end of the casting stage, they let me know. They chose me. Very grateful to them.

HC: What is your favorite scene of yours in "Descendants of the Sun"?

J: Probably the first scene in episode 5 where I come back to Ye-hwa at home after a long trip. And the scene where I meet up with Mo-yeon for the first time in the garage. These are my favorite scenes and at the same time I did bad. Should've done better. A lot better. (sigh).

HC: What has been your most challenging scene in the drama and how did you tackle it as an actor?

J: I think the scene where I meet up with Mo-yeon for the first time. This was hard, cuz you know, anyone could panic when acting in front of [Song Hye-kyo]. I tackled it thinking she's just a person. Just an ordinary woman. But I still think I did it bad. I see the frustration in my eyes...

HC: What do you think about the immense popularity of the show? Did you envision that it would do so well and that you would get to be a part of something so huge?

HC: A lot of fans are really enjoying your presence in "Descendants of the Sun". Have you been experiencing the effect of that popularity in terms of your daily life? Do a lot of people recognize you in public. Have you received more fan mail?

J: I think so. But not to the point where I feel it's hard to stroll around in public. Lots of messages on social media. Never received this much in my life haha.

HC: Has "Descendants of the Sun" opened up more opportunities for you?

J: Sort of. Quite a few castings for TV shows and other films. But I don't want to have a dash at all the opportunities I am receiving. I am very grateful for giving me those opportunities. But I think I want to do fewer and better, when I am more ready as an actor. I may receive less jobs later or none, but I still don't want to be an obstacle to one's project.

HC: What sort of roles would you like to take on in the future? Are there any Korean actors with whom you would like to work when you do take on those roles?

J: Any role that has massive impact on the cinematography. Even if it's got a few scenes. I'd love to work with any of the great Korean actors. It'd be an honour to work with anyone.

HC: Can you give us a sneak peek into your plans for the year?

J: Like mentioned, I'd love to do anything that could be an outlet of my creative thoughts. All the arts in general.

Heather Folsom, USA: What was it like to work alongside Song Joong-ki, Song Hye-kyo, Jin Goo, and Kim Ji-won any advice that was given or behind the scenes stories?

J: Was one hell of an experience. I don't usually get nervous on stage or in front of a camera, but alongside those actors, I was nervous at times.

The advice I've given myself was to think that each and every one of those actors is just a person, a man, an ordinary woman. But still, it was uneasy and I was shaky when acting. Probably because I'm aware that they know full well when I'm not acting comfortably. You know, they can see these things through.

Anne, Newfoundland, Canada: Was your role in the "Descendants of the Sun" what you expected it to be?

J: Yes, the role was somewhat what I expected it to be. But the job was more like re-creating that persona with the directors and the writers based on what's written on the script. It was kind of hard to keep that balance between Korean and non-Korean. Daniel's half Korean who knows Korean language and its culture but not too Asian at the same time. Daniel would love kimchi but prefer a pint of beer at a pub over soju. You know, it was hard to keep that balance. The role was sort of me in real life but still you got to re-create that persona.

HC: Do you have a message for your international fans?

J: Thank you so much, all of you, for recognizing me. Life's long, night is young. Stay in touch y'all!

Thank you so much, Jasper, for taking the time to talk with HanCinema and your international fans. And thank you to R's Company for helping to make this interview happen! Thank you to the HanCinema team for all of your help! It is a pleasure to be able to speak with talented people, and Jasper, you are one talented man! We know we will see great things from you in the future.

HanCinema and Jasper Cho fans, what did you think of the interview? Leave us a comment below!

Please enter here to win a signed autograph from Jasper Cho who played Dr. Daniel Spencer in "Descendants of the Sun"!

UPDATE: Good news, HanCinema and Jasper fans. We have not one, but THREE, signed photographs. You all have one more week to enter to win an autographed photograph of Jasper! Entry closes April 30, 2016. Enter now to win!

Interviewed and Written by: Raine from 'Raine's Dichotomy'