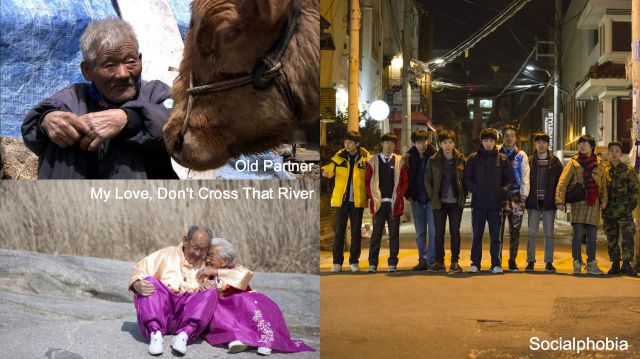 The top two most popular independent Korean films of all time are documentaries. "Old Partner", a 2008 film which dealt with an old rural man and his working cow, nearly hit three million admissions. "My Love, Don't Cross That River", a 2014 film about an elderly couple who have been together for several decades, nearly hit five million admissions. But it's worth noting that documentaries about old rural people do not necessarily always make bank, regardless of how good they are. Consider "With or Without You", about an elderly woman living with a retarded woman who she bought several decades ago for her husband to impregnate with a son after their own sons unexpectedly and tragically died. That one only got close to thirty thousand.

But as is almost always the case in movies, business considerations, in this case screen allotments, tell the real story. "Old Partner" and "My Love, Don't Cross That River" both started out as low-scale releases, but as powerful word of mouth grew and audiences remained unimpressed by the more commercial releases coming out at this time, major theater companies made a point of providing these movies with screens.

"Old Partner" and "My Love, Don't Cross That River" are both exceptional cases which achieved success due to a combination of high quality and luck. In general terms, though, the South Korean independent film scene (like most independent film scenes) is limited in what it can accomplish by...well, by being independent. They lack much infrastructure for advertising, and the frequently eclectic nature of independent films is such that they rarely have much hope of appealing to anyone aside from serious film aficiandos.

Let's take "Socialphobia", which received over two hundred fifty thousand admissions. This was not due to any inherent quality of the film, but rather the sheer dumb coincidence of it starring Byun Yo-han as the main character right at the time when "Incomplete Life" was at its most popular. That's not the kind of advertising you can buy- and in the low admissions arena of independent film, the Byun Yo-han factor was even enough to briefly bring "Tinker Ticker" back into theaters, where it managed to add about a thousand admissions to its overall run, rendering it reasonably successful.

...By independent film industry standards, of course. Really, I can call it an industry, but in terms of marketing and distribution independent film is so laughably outclassed by mainstream film it's not even a competition. Most people just go to the movies to kill time. Others who think of themselves as serious film fans in reality only pay attention to the work of a few well-regarded directors. That leaves everyone who doesn't already have name recognition scrambling for scraps. The profit margins for independent movie theaters are so bad that several have closed down this year- Sponge House and Miro Space in Seoul, as well as Gangreung's local art house theater. There's just not enough of a market for it.

But all is not completely dire. Mainstream South Korean movie theater chains have made a point of at least trying to promote independent films, by putting up screen allotments and advertisements where available. Part of this is self-serving- the major chains can avoid a fair amount of criticism by making a special effort to help independent films. But in broader terms many of these corporations have wised up to how a strong domestic film market works to improve local pride in movies, which consequently makes people like movies more, so they go to the movies more often.

The On-Demand element of South Korean television also helps a lot. It's important to remember that box office numbers alone are not a reliable indicator of how much money films really make. I've been told my multiple directors that On-Demand service has been a godsend, easily making ten times the money they could expect from theaters, making the financing of future projects all the easier.

Ironically enough, this only applies to fictional stories- documentaries still struggle with getting made available via digital distribution services, and are more reliant than ever on traditional funding sources like film markets. Still, however limited the scale may be, the future of South Korean Independent Film is looking bright. More films are being released now than ever before, and that can only be a good thing.