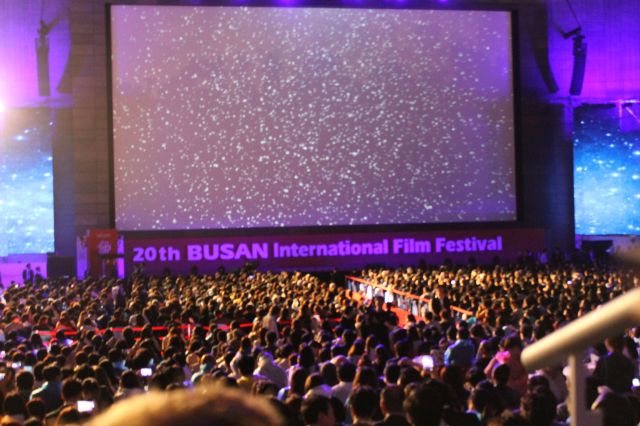 Earlier this year the city of Busan attempted to pressure Lee Yong-kwan, the director of the Busan International Film Festival (BIFF), to resign from his post. In the film press this provoked a major discussion about the creative freedom of festival directors, the principal concern being that this pressure was the result of the director's insistence on screening "The Truth Shall Not Sink with Sewol" at last year's festival. Much less well publicized was the report coming out later in the year indicating that the main reason for the pressure was, as the city of Busan always claimed, the result of an audit which showed that although BIFF is a very expensive event it is rather poorly run, with relatively few paid staff, major congestion issues, and almost all of the on-the-ground work done by volunteers. This report was of no surprise to me- nearly anyone who has gone to BIFF in recent years has observed this rather curious contradiction.

BIFF "solved" its problems by working to drive up admissions, which is why this year's festival was touted as a success. But I use quotation marks for very good reason here. While you may have read stories about BIFF's success, chances are you haven't read much about the actual films which screened at BIFF. Indeed, what little information there is on those films usually concerns the international sections, or at best South Korean films that already premiered at other major international film festivals. Though the South Korean film industry prides itself on hosting the biggest most important film festival and market in Asia, this has not translated into greater exposure for Korean independent films.

Mainly this is because of issues regarding the press. There have been widespread rumblings among industry professionals about how the festival has become increasingly closed off to all but the well-connected. I can speak to that much from personal experience- my credentials were rejected by BIFF this year, and I wasn't the only one.

I suspect that one reason for my own situation might be my outspoken opinion regarding the festival's poor management dating back to last year- it's a complaint very few people are willing to make on the record, precisely because they're afraid of a situation like this coming up. Officially the reason for my rejection is my inability to provide HanCinema's tax information on demand. In practical terms, though, the real reason is most likely cost-cutting. After the KFMA's successful drive to suppress journalists earlier this year, BIFF figured, correctly, that it would not meet much resistance or criticism if it did the same.

The irony here, as with the KFMA, is that giving out press credentials doesn't actually cost anything. Members of the press have their own special seating sections. If you're ever been to a sold-out festival screening with empty seats, that's why- the press don't always use their allotment. Aside from that a press pass only grants access to the press screening and reception rooms- which at a crowded atmosphere at BIFF are rather essential for any serious journalist to get any work done, but useless to a general spectator.

The determined attitude I take regarding my work is inarguable by anyone who has followed it. I was able to review nearly every single Korean film shown at BIFF last year, including several movies which still haven't been released domestically. My removal from the approved list drastically reduced the amount of publically available English-language Korean film reviews for BIFF screenings. When I attempted to point this out ahead of time to festival staff they simply suggested I attend as a general spectator, betraying among other things a rather shocking failure to understand what the general atmosphere of their festival is actually like, and why they had to be cost-cutting in the first place.

If this situation was just localized to BIFF even that might not necessarily be much of a problem. But I was further shocked to discover similar treatment at the Seoul Independent Film Festival (SIFF). For the first time this year, SIFF had English subtitles at almost all of its screenings, and was pushing to obtain a status beyond novelty. Having missed out on the upcoming Korean independent films at BIFF, I was eager for the chance to offer coverage, signed up for the festival and received a credential. Having watched six of a planned twelve independent Korean films, my pass was revoked mid-festival, because of "several spectator complaints". Who complained, and what their specific complaints were, was apparently not publically available information.

Including myself, there were exactly three reporters at SIFF- and I was the only foreigner. This is not an organization that can really afford to alienate the press. But I'm less bothered by the personal slight as I am the general cluelessness. This kind of public relations issue is bad for SIFF's already slight reputation. Besides that, the real people being penalized here are the filmmakers for the six movies I did not have a chance to see. I no longer know when I'll get a chance to give these filmmakers their fair shot at international coverage, good or bad.

But that's just a bigger problem with the Korean film industry that's been seeping into all sectors. I don't think the man who made the decision to ban me did so because he was a total jerk. He was simply operating under the same ruleset that has been utilized in nearly every sector of Korean film culture this year- when in doubt, restrict access, because who cares about press coverage as long as we're all getting paychecks?

This attitude is penny wise but pound foolish, and if Korean media outreach as a whole had taken this attitude fifteen years ago we wouldn't have any Korean wave at all. By and large today this issue is mostly endemic to film. Note that KOFICE offered HanCinema's own Lisa Espinosa, and several other well-respected English language bloggers, an opportunity to provide press over several wide facets of Korea's media infrastructure (including BIFF) because KOFICE knows that the strength of Korea's cultural products is only as powerful as their ability to gain exposure. This is smart long-term strategy- a strategy which Korea's increasingly short-term focused film culture is unable to grasp.

The filmmakers themselves, ironically enough, don't fall into this, which is why the quality and breadth of Korean film remains so strong. It's the business end that's holding Korean film back, and that's the single biggest disappointment in my work. For all intents and purposes my job is free advertising for the Korean film industry yet time and again the Korean film industry finds ways to make it more difficult for me to do my job. It's hard to imagine any disaffected observer coming into this environment and willingly staying here for very long.

In the end I'll probably continue doing the same work I've always been doing starting again next week. I enjoyed all six of the films I saw at SIFF, and it would be unfair to penalize the filmmakers just because the business department doesn't know what they're doing. Even so, I'm disappointed, and it's hard to imagine the situation will change. Awareness is the first step, though, and hopefully, I've helped inform all who read this series about why exactly it is that, compared to every other Korean media industry, it's so hard to get a good handle on Korean films.

Article by William Schwartz. He can be reached at william@hancinema.net.