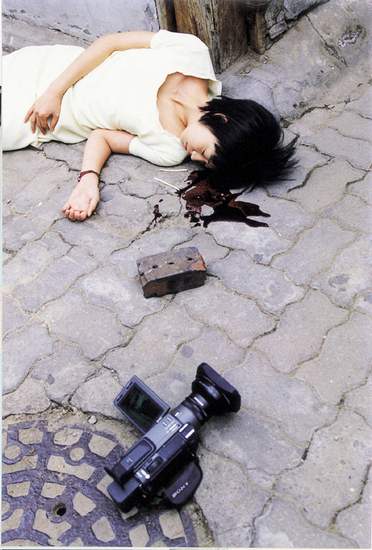 "Real Fiction" (2000) is a gritty experimental film of sorts, arguably embryonic entertainment that purposefully tinkers with the art of filmmaking with debatable results. The film was reportedly shot in 200 minutes (cut to 84) and contains an interesting mix of formal framing and dirtied handheld footage. It may not be entirely convincing in both plot and purpose, but this compact and nihilistic nugget is still worth watching to see what happens when Kim Ki-duk (alongside Kang Cheol-woo) throws caution to the wind.

Like so many of Kim's curious characters, "Real Fiction" stars a taciturn, and nameless (simply "I" in the credits), loner (Joo Jin-mo). This time it's not some dumb pander ("Bad Guy") or a silent sneak ("3-Iron"), but a passive street artist whose history of submission and suffering gets roused by a strange woman with camera. The film opens with this sketchy artist sitting pathetically in a park absorbing rounds of ridicule from rude customers. Slumped behind his easel he sits, waiting for the next customer who may or may not pay him, and who will mostly likely criticise his efforts without gratitude or remuneration. While this downcast and troubled man lets the abuse and dissatisfaction wash over him, a woman openly films the public mockery, and in doing documents his pathetic plight.

The filmmaker gets her likeness drawn, but then apologises saying she has no money. In return, however, and not without a shifting sexual undertone, she tells him to follow her and promises that he will enjoy what she has to offer. Our placid pushover eventually follows this penniless white rabbit to a dark room, where a man with a gun is waiting. He spits abuse at him, beats him, hands him the revolver, and encourages him to seek revenge against those who have wronged him. It's a particularly strange scene that pushes our artist over the edge, hypnotising him into punishing those who scared his present. Meanwhile, the mysterious woman who lured him away continues to film, framing his fair face through her lens seemingly without purpose or pleasure.

His targets include a cheating girlfriend, an old and abusive military superior, a perverted photographer, and his old flame's ex-husband. One by one he finds and finishes them rather creatively (bullets, sharpened pencils, snakes, a deep freezer, and pruning scissors are some of his opportunistic weapons of choice). However satisfaction eludes him and a smile never threatens his dispassionate demeanour. Perhaps his grief was too great to curtail or cure, but like much of Kim's oeuvre there is a corrosive pessimism and niggling nihilism that pervades the pictures.

The film was shot in 'real time' after extensive rehearsals, and the result is an apathetic aesthetic that many will find moot and uninspiring. The 'extras' appear to watch the action knowing a film is being made, a self-reflexive motif that runs through this experimental piece, and it's one that both jars and distracts from the authenticity of events. This is intended, naturally, and viewers might struggle to synthesis this uncanny inclusion into anything meaningful or even artistically valuable.

The most interesting point I noticed came in the film's final moments, or rather when the opening and closing scenes are compared. Our bloodied and broken man returns to the park to once again sit behind his untouched easel, while another street vendor (selling dolls not far away) gets attacked by three suited thugs (assumedly loan sharks of sorts). The man rebels and ends up stabbing the main provocateur, and in the process makes quite a scene that attracts the attention of those around. Meanwhile our mopey protagonist sits undisturbed as the spectacle unfolds.

Now at the beginning of the film the man's sales cries could be heard as he tirelessly prompts his wares to passers-by, a stark contrast to "I" and his silent acceptance of abusive. There is something rather curious about choosing to bookend the film with such an uncomfortably similar equilibrium, especially when we compare the man's actions (the vendor openly stabbing someone in public) to the unseen (except for the camera footage taken by our mystery woman) lives our artist destroyed. Here we have vocal outrage and public shows of unlawful behaviour, versus the unacknowledged brutality of our man: public outrage vs. private vengeance. It's a point made potent by the film's own narrative regard, but even so the film plays possum to any obvious significance.

"Real Fiction" is a self-reflexive and curious creation that, perhaps frustratingly, demands the viewer fill-in the quality gaps themselves (it's Kim after all, right?). It'll be worthwhile for fans of Korean cinema's black sheep, but those who enjoy the lighter and brighter side of K-cinema best move along.

Available on DVD on Amazon