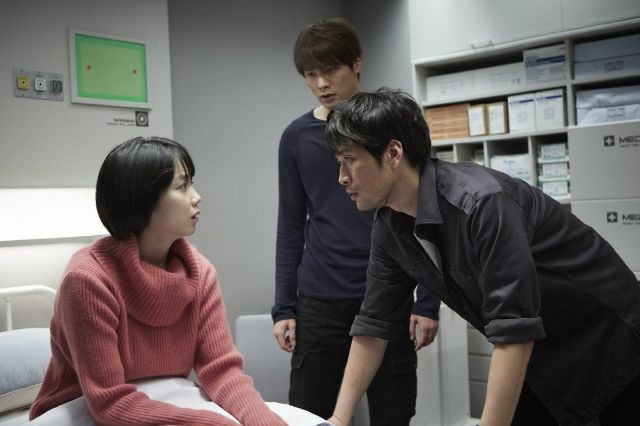 From the very beginning we see that every character in this movie has very personal reasons to want access to a time machine. Not even selfish reasons, necessarily- the trouble is that they all have an agenda. And even when faced with a clear blueprint for future crises, each and every character naturally assumes that their agenda alone is the one that won't ruin everything.

Let's take head researcher Woo-seok (played by Jung Jae-young). Here is a man who clearly has a lot of faith in the power of science to save the world, and his views appear to be vindicated when on the first test run, he discovers the underwater research facility to be in shambles after only a cursory hop into the future. The entire research team is, unsurprisingly, quite concerned about this. Acting on limited evidence, they take steps to prevent potential catastrophe.

Yet even in these early stages, it's clear that something's not quite right with their peculiar brand of reasoning. There's almost no sense of genuine confidence, faith, and trust among the people here. Even though they're smart enough to build a time machine, these people lack the critical thinking skills necessary to posit that every individual member of the team has a vested interest in getting home alive. Divorced from this obvious sense of common cause, the crew stops functioning as a scientific team, becoming a band of cutthroats only thinking of their own immediate selfish interest.

In many ways "11 AM" is a slap in the face to science fiction fans. The time travel conceit is a relatively weak one. The plot quickly starts to follow a predictable trajectory. And the scientists, far from being noble heroes, are trapped within their own personal emotional caverns, incapable of seeing things from each others' view, and hoarding information when necessary in a rather foolhardy attempt to maintain an advantage over their fellows. Yeong-un (played by Kim Ok-vin) has the best grasp of the situation- yet even she clearly does not trust anyone else in the crew. In the end even this woman isn't much better than the rest of them, though she is the only one with the sense not to get violent.

I confess that in the earlier portions of the movie, I got bored. The first really tense, exciting scene happens in the future, and it's from the future that we find all the most emotionally gripping conflict. I realized after awhile that I wasn't the only one to think like this- the crew, too, is clearly more interested in spectacle than absolutely playing it safe. "11 AM" may seem to waver in parts, but by the end its general message about human nature is an unmistakable one. This is a film that mocks it audience with characters who are too smart to live.

This is at no point clearer than near the end, when we finally find out which specific event created the final crisis that destroys the research station. Suffice to say, the disaster that struck the original timeline was a preventable one. "11 AM" is not a perfect movie. The inability of its characters to cohesively plan at some points strains believability. But then, they're not the introspective selfless types. When they stare into the abyss of time travel, the abyss stares back at them. And it does not like what it sees.

"11 AM" is directed by Kim Hyun-seok and features Jung Jae-young, Choi Daniel and Kim Ok-vin.

"[HanCinema's Film Review] "11 AM""
by HanCinema is licensed under a Creative Commons Attribution-Share Alike 3.0 Unported License.