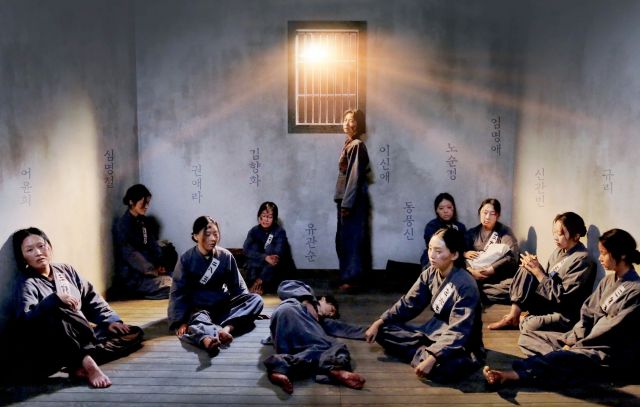 Designed with the centennial of the March 1st Movement in mind, "1919 Yu Gwan-sun" serves an obvious purpose as a documentary. We may know Yu Gwan-sun by name, but who was she? And who were the women she collaborated with in prison? They were not always so well known. The opening scene depicts the writing of a New York Times article in 2018 that helped bring Yu Gwan-sun to prominence. "1919 Yu Gwan-sun" goes further, giving context to the lives of the other women who were in the Seodaemun prison who also defied Japanese authority.

Unfortunately "1919 Yu Gwan-sun" is less a historical documentary than it is a series of reenactments. While we do get brief explanations from relevant learned persons about critical background information, for the most part "1919 Yu Gwan-sun" jumps from one torture scene to the next. The documentary is less about the accomplishments of the women it profiles and more about how they were tortured for their defiance by the Japanese government and those Koreans who willingly worked for it.

On one end this is certainly accurate. A major reason why Yu Gwan-sun came to prominence is that all she really did was make noise at a prison loud enough that people outside the prison could hear it. For that minor, mostly symbolic victory, she was slowly and brutally murdered. Yu Gwan-sun's main contribution to Korean independence was to act as a martyr for it. Even if the other women she worked with managed to survive for much longer, they are relevant for the same reasons.

Martyr is an especially appropriate word to use here because "1919 Yu Gwan-sun" was produced by the Christian Broadcasting Service. The surprisingly lengthy torture scenes need to be viewed in that context. The suffering of the women is intended to be inspirational, because they loved Korea as much as they loved God. These women were acting in the name of a higher purpose, and while what they went through was awful, ultimately they would have seen that sacrifice as vindicated for the sake of independence. This theme is explicitly noted in the post-credits sequence.

"1919 Yu Gwan-sun" suffers from bad timing as much as anything else. Having seen "A Resistance" just last week, I was hungry for a more factual recollection of the Yu Gwan-sun story. "1919 Yu Gwan-sun" doesn't provide that. For the most part it's just a different kind of dramatization- and one that's much less artfully done. "A Resistance" excelled on understatement, strong performances, and a cold mechanical look at Imperial Japan's prison structure. This alleged documentary is considerably more bombastic and less subtle than that.

I liked the bits in "1919 Yu Gwan-sun" that explained what these women were doing with their lives before they became prisoners. These moments, whether they take place in Bible study groups or gisaeng training facilities, provide spiritual context that does a lot to explain the later defiance of these women in the face of torture. The problem with "1919 Yu Gwan-sun" is, there's too much torture and not enough context. That makes for a fairly weak documentary.