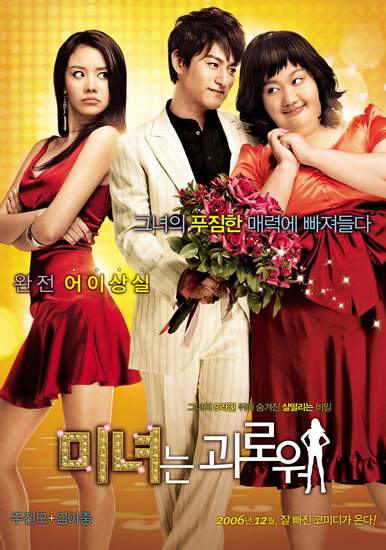 A horribly fat woman, dreaming of a job in the entertainment industry, gets plastic surgery so that she can try to get her shot at the big time. There were ample fat jokes throughout the movie's extended first act. It sounds like a pretty bad recipe for disaster. And yet, I was pleasantly surprised to discover that "200 Pounds Beauty" is lacking in the one essential element that makes fat jokes so crass. It's not especially mean. At least to the fat person.

Make no mistake- Han-na is definitely the butt of many jokes while she's still in fat form. But they have surprisingly little to do with her being fat. Han-na is an extremely clumsy woman. Usually when she engages in a bit of physical comedy, it's against rather obvious advice being given to her by another character. These are accidents that would have happened even if she wasn't fat- though obviously her added girth doesn't help matters.

But more than just being clumsy- Han-na is extremely upfront, energetic, and proactive about achieving her goals, both career-wise and in her romantic life. All of these facts are just as true about her before and after she has the surgery- resulting in an unexpected but welcome sequence of satire. Han-na is, again, the exact same person after having the surgery, and causes the same number of easily preventable accidents through her absent-minded clumsiness. But people that would have torn her head off for acting this way before she was beautiful practically trip over themselves to excuse her from any fault no matter how much damage she's caused. The dissonance between this behavior is excellent, and goes a long way to showing that the main problem in Han-Na's previous life was not her weight, but rather her inability to control the way other people chose to react to her.

I really appreciated how even though it was clear Han-na lives in a world with shallow people, her love interest Sang-jun is a man who recognizes Han-na for who she really is- a musically gifted woman with a powerful passion for musical performance. But more than that, he recognizes her as a woman with real feelings who deserves to be treated with respect- especially since she's doing his company a big favor by lending them her voice. He sees, even without realizing it, that Han-na is not the sum of her appearance and talent. But does he recognize her as a woman- even if a relatively unattractive one?

"200 Pounds Beauty" never does answer that question. If Han-na had never gotten the makeover, would she have ever really had a chance with Sang-Jun or the entertainment industry? Even while providing us the heartwarming ending we're expecting, "200 Pounds Beauty" never really answers that question. On the whole, though, the movie still felt to me less like a glorification of the magic of plastic surgery and more a condemnation of the society we live in where for so many people this is pretty much the only way they have of achieving their dreams. You can't stop people from being jerks. That much we have to change ourselves. It may not be a perfect feel-good moral, but hey, this is a romantic comedy. We don't need all the answers. Just the hope that people can improve and find happiness if they really put their mind to it. And "200 Pounds Beauty" has that sentiment in abundance.