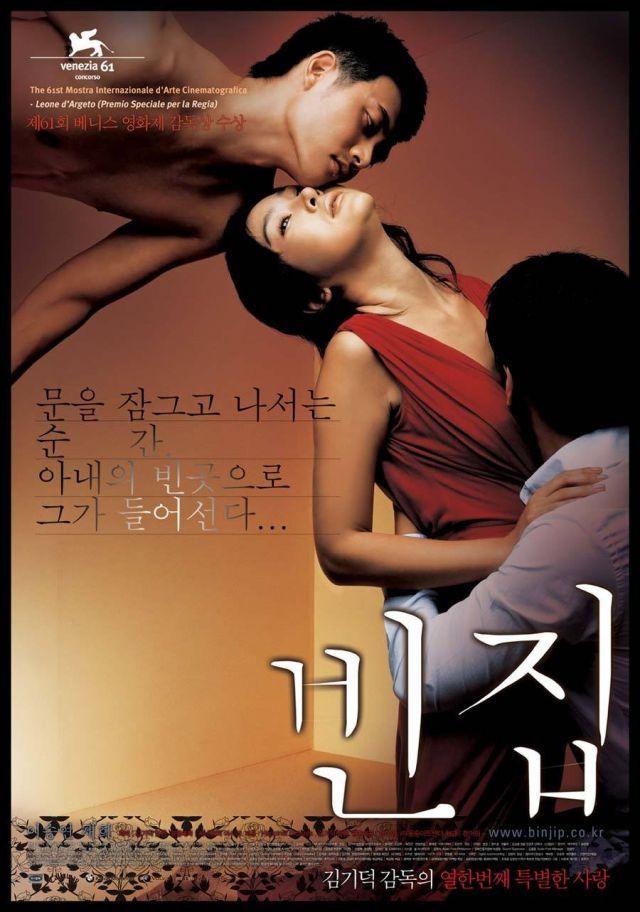 Answers are overrated. "3-Iron", directed by Kim Ki-duk, is a film that defies any attempt at explanation. Oddly, everything that happens makes perfect sense. In literal terms, I could describe to you every individual scene fairly easily. But this information would be deceptive. This is because at every scene we're always left hanging with the question "why?"

The audience isn't alone in confusion. Multiple characters at multiple points demand explanations from stone-faced taciturn individuals, and they're almost always completely frustrated and rebuffed in their quest for an answer. So, what is any of this supposed to mean? When there aren't any words, what meaning can there be?

Film is much more than just words. As an art form, film has the special distinction of being able to engage us in fluid visual motion and integrate all of this into context. "3-Iron" is an intensely brilliant study in building up an almost entirely visual mystery. But rather than drawing us closer to an answer, it takes us farther away. Not from an answer, but from the entire concept of answers to begin with.

"3-Iron" begs the question of why any of us do anything. Why watch this movie? What are we looking for? Are we actually going to find it? We can't even reach a platitude along the lines of "the fun is in the journey itself" because there really isn't any actual journey. There are definite moments of genuine joy in this film, but they appear in a fragmented indirect contextual manner that can't really be directly connected to any specific message or action that any of the characters consciously take.

Does any of this sound familiar? What other places are there that don't clearly follow through on the rules of narrative logic? Try this- your own life. The central character of "3-Iron" is a cipher for the choices we all make in life. We certainly make an effort to plan as much as we possibly can, but there are always those moments when we're acting the best way we can think of in the moment, and really arent taking into account the way we're supposed to be acting.

That brief description is a bit misleading, unfortunately. Even those relatively vague words carry an implication of rebellion or nonconformity. But these concepts, too, are entirely besides the point. Breaking free of these ideas, if only for a moment, is the release, the reason why you shuld watch this film. For me, at least, film is about exposing myself to new, varied, and interesting ideas. And "3-Iron" has these ideas in bulk.

Of course, all of this is only true for me. You may get something entirely different out of "3-Iron"- and that's fine. I really don't think there is a right or wrong method of interpretation here. It's simply a matter of keeping your mind open, and accepting the fact that at some point or another you could have been described as having the emotions of any individual character in this film. Prepare yourself that far, and "3-Iron" will not disappoint you.

Available on DVD and Blu-ray from YESASIA and Amazon