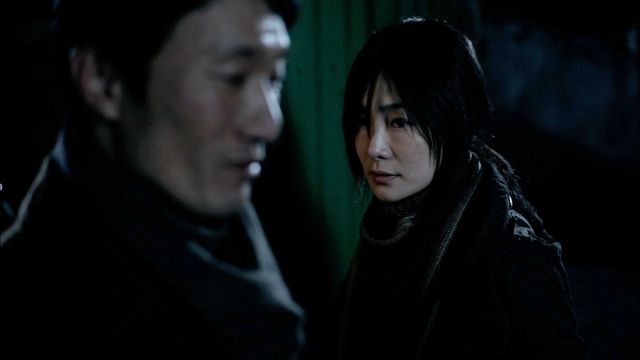 At the border between North Korea and China lies the Yalu River. The forty-eight meter width of the river is the final obstacle for North Korean refugees wishing to escape their country and make a new life somewhere else. But refugees aren't allowed to just leave North Korea. A small cadre of soldiers stands stationed at the border, with orders to shoot anyone who dares try to make the crossing to China.

"48m" is at its strongest when depicting the exceptionally grim river. There's terror element to this film that easily rivals any supernatural horror movie. Multiple are killed and tortured, and we see this in complete brutality. No effort is made to sanitize this. The result is extended periods of prolonged fear that are punctured by visceral shock and terror when the fears finally become reality, and we are exposed to the sheer brutality of man.

The filming for the most part takes place at night. However, even in the daytime scenes, there's this grody shadowy filter that everything seems to be filmed through, that just makes the film look out-of-focus and dirty. This is used to good effect, though. I realized during one extended scene at the river that I really didn't want to see how this looked. Because if I can clearly see what's going on, then so can the North Korean soldiers.

The film still has flaws- primarily in the category of characterization. I was scared of, and worried about the fate of nearly every other character because I have empathy for fellow human beings. But there's never really a very good sense of who these characters are and what's motivating them. What little we see of the small North Korean border town doesn't seem that awful. Obviously, the presence of soldiers whose only purpose is to brutalize people trying to leave the country is bad, but aside from that it just seems like a typical rural hamlet.

While wttempts are made at backstory and characterization, they just don't really work that well because the shadow of the river is looming over every scene. Personal problems and childhood conflict just aren't that interesting when there's this constant reminder that at any point, any character could meet a horrible grisly end. I understand why the characters are defined this way, but when a film has visuals this powerful scenes with lots of talking just feel like a comparative waste of time. The ending, in particular, resolves a character arc without any real visual spectacle at all. And I felt rather cheated by the abruptness of it. While this may have been the purpose, I didn't feel that thematically the build-up was appropriate.

Regardless of these issues, the Yalu River scenes are extremely effective as they morosely depict the grim realities of escaping from a regime brutal enough to kill its own citizens. I feel that these strengths outweigh the flaws in scripting, and make for a very effective film about the desperation North Korea inspires, even if it's not so good at showing how. Definitely recommended for anyone curious about the agony and terror North Korean refugees have to go through just to leave.