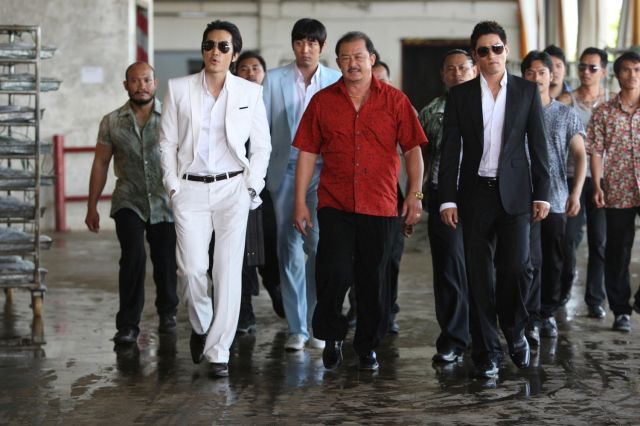 Kim Hyeok (played by Joo Jin-mo) is a North Korean defectee who is now a police detective working in South Korea but also does arms deals on the side. Yeong-choon (played by Song Seung-heon) is just an arms dealer, though he's metaphorically Kim Hyeok's brother. Kim Hyeok's actual brother is Kim Cheol, who doesn't want anything to do with criminal enterprises at all. Also he's the one who starts the movie out in North Korea. Well I guess depends on how you define flashbacks.

"A Better Tomorrow" is a remake of a Hong Kong action film, and I can't help but wonder if director Song Hae-seong was working under the assumption that the viewer already basically knows who all the characters are. Writing as someone not familiar with the original film, I had a lot of trouble keeping the characters and their relations with one another straight. It was some time before I could even figure out what the movie was about or what the character motivations were.

Well. it's brotherhood. This is a movie about Kim Hyeok's brothers who also suffered under the North Korean regime, and they all try to muddle forward with crime as a backdrop. The main obvious problem with this is that the North Korean element is not seriously explored. Defectors do not have an easy time in South Korea. A defector who manages to become detective would be an impressive feat on its own. A defector who also becomes an illegal arms dealer...that just doesn't make sense. Defectors are under increased scrutiny.

But then these are not issues which the film considers relevant. It's all about explosions, shootouts and broader themes of brotherhood. My ability to appreciate these points was limited by greater inability to understand anything that was happening in the story. There's just too many layers an d too many unanswered questions. I was never sure what this movie was trying to do, and the end product consequently came off as a mess.

Now, to someone who can actually figure out what's going on, this might be a passable story. Even the parts I understood, I got rather baffled by the mixed metaphors of it all. Kim Hyeok is from North Korea. I guess that makes the fact that he does arms deals OK? Because the villain lacks criminal honor? Outside from explicitly coded acts of villainy I couldn't really tell the difference between the good guys and the bad guys.

This might have been part of the point, but with no emotional connection, there's really not that much to recommend this film. I was reminded at points of "The New World", a similar (albeit later) crime film that does a much better job establishing who its characters are, underscoring the ambiguity of the heroes versus the villains, and tempering its action scenes with a hard edge to keep the situations mired in a strong sense of reality. These elements are all lacking in "A Better Tomorrow". This is, at best, a genre film for a fairly narrow range of fans.