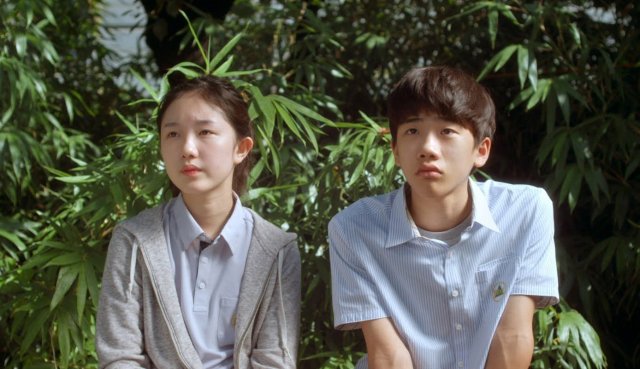 Boy (played by Ahn Ji-ho) is the kind of sensitive young man who is deeply affected by emotional moments in strange independent films. Sungreen (played by Kim Joo-ah) is the kind of outspoken young woman who wants to create such moments herself in her own films, even as Sungreen sleeps through the ones she actually watches. Together, they get wrapped up in a mystery that begins to consume all their spare time.

Their relationship is a real joy to watch because its so easy to see who they are as people from how they act around each other. We can see Boy as being surrounded by domineering women mostly out of circumstance but also partly out of choice. Boy himself isn't totally sure why, as it's the kind of thing he's only just recently started to notice. An important factor to that is how underneath her bossy exterior, Sungreen sincerely respects Boy as much as he respects her.

I was a little disappointed to find that the relationship between Boy and Sungreen is not, as is implied by the title, actually the whole focus of the movie. "A Boy and Sungreen" is fairly tightly wedged within a plot, and it's firmly Boy's plot. While some dramatic life events do happen to Sungreen too and we do eventually get to see her movie, the narrative revolves entirely around Boy's coming of age story. He's trying to navigate becoming a man with no clear male role models in his life.

What makes Boy's story weird is that he's not really a very self-centered person. That's why learning that his mom told him a very significant and apparently pointless lie wounds him so. Boy is convinced that there's some sort of weird conspiracy at play, but it ends up having nothing to do with him or even his mom really. That climactic moment of realization on his part is significant because it's a moment of weird relief. There's actually a reasonable explanation. How fortunate.

Well, not really, but then that's the whole point of the movie. Boy learns that, to his surprise, trying to do new things just makes him stronger, even when these are bad things he should probably be punished for. I particularly liked one weirdly apologetic scene in this vein where Boy isn't really in trouble at all because in this one specific context, it's actually kind of relieving for boys to get into fights because it demonstrates they're capable of having sincere emotional reactions.

That kinds of sounds like a subversion of toxic masculinity as a concept, but then that's what makes "A Boy and Sungreen" such a fascinating character study. It's a story about a boy who doesn't really get what masculinity is just sort of learning it by accident because the various boys, girls, men, and women in his life provoke and challenge him into defining his own boundaries. The ensuing drama thus proves to be adorable, even if it is at times ambiguously dangerous, all lovingly taken from Boy's own perspective.

"[HanCinema's Film Review] "A Boy and Sungreen""
by HanCinema is licensed under a Creative Commons Attribution-Share Alike 3.0 Unported License.