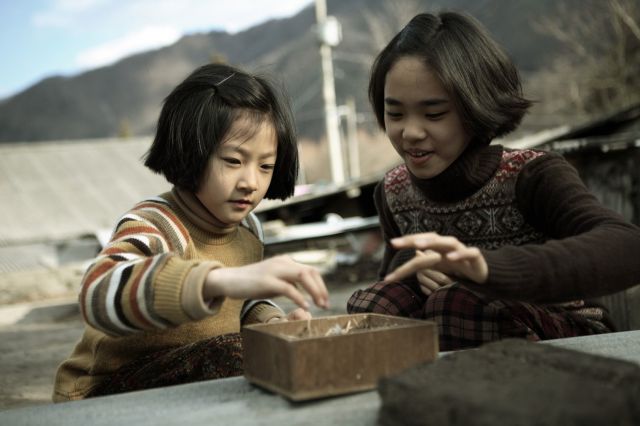 Jin-hee (played by Kim Sae-ron) is a sad, angry child. She doesn't look like one for the first several minutes of the movie- Jin-hee's genuinely having a lot of fun on a day out with her dad, whose face is oddly obscured. But there's a rather ominous foreboding in the languid way this man interacts with his daughter. That and the absence of sound, which gives the impression of a dead world. Or at least, one that's soon to be dead.

"A Brand New Life" is a very judgmental film, but surprisingly, it doesn't come off as overbearing or cruel, even though writer / director Ounie Lecomte is herself a Korean adoptee who was adopted at a late age. This is because the film is intensely focused, not on the greater issues regarding international Korean adoptions, but the very personal rage Jin-hee feels at having been told quite explicitly that she is no longer worth loving.

None of the orphans Jin-hee ends up living with are really doing all that great- they're orphans after all. But in many ways they're still better off than Jin-hee because they don't actually know what their situation is. The fact that they have been abandoned won't set in for years. Jin-hee already knows, though, and her behavior takes a quick turn for the antisocial. While she does eventually gain some sense of empathy and friendship, the screenplay is always cognizant of the fact that Jin-hee is still a child. Any setback destroys her sense of self-worth and puts Jin-hee back in the same miserable place where she started.

Her coping mechanisms are brutal. I was actually relieved that for the most part Jin-hee takes out her anger on herself rather than the other orphans. The cruelest scene in the film involves Jin-hee finally becoming so destructive that another one of the orphans actually gets an adult to intervene. She is a problem child- completely inconsolable and, well, what are we even supposed to do with that?

A more romantic movie would give Jin-hee an adult to confide in and some way to rebuild her trust- but the brand new life Jin-hee is stuck in for the film's runtime is not one of hope and optimism, but a coming of age story with no real silver lining. Yes, Jin-hee is eventually adopted. This is really quite irrelevant to the girl's overall experience, which is concerned more with the learning process than a happy ending.

It's this necessary perspective that really makes "A Brand New Life" essential viewing for adults, even as all the central characters in the film are young girls. Yes, children are resilient and yes, they will probably survive whatever difficulties they encounter even if abandoned. But that lingering feeling of resentment will always be there. It's hard to imagine that, decades down the line, Jin-hee will have an emotional reunion with her biological father. That's the stuff of wishful fantasy- even if the memories evaporate, a child's sense of feeling unloved will yet remain.