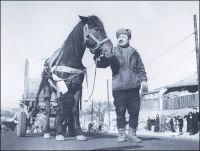 "A Coachman" is a landmark for South Korean cinema, since it was the first Korean film to win a major international award, netting the Silver Bear Extraordinary Prize at the 11th Berlin International Film Festival ("To the Last Day" , which also won the same award, was actually produced a year before but was submitted to the 12th edition of Berlinale).

Choon-sam is the titular character, who works a coach that carries heavy objects (barrels etc) in the city, in a setting though, that seems to have long surpassed him, since the rapid modernization of post-war Korea has filled the streets with cars. Choon-sam is also a single father, who struggles to raise his four children. His first son, Soo-eob studies to become a lawyer but has already failed his exams once, although his father is utterly supportive of him. His first daughter is a mute, who has been married but her husband cheats on her and frequently beats her, to the point that the girl has left the house a number of times, to the nuisance of her father, who considers her a burden and is not reluctant at all to speak his mind to her. His second son always gets in trouble either for fighting or for stealing, while his youngest daughter, Ok-hee is tired of her poorness and is eager to use her looks to find a rich husband, with the help of a friend who seems rather experienced in this tactic. A woman from Suwon (Suwon-daek) works as a housekeeper for the owner of the coach Choon-sam works for, and tries to help the poor man any way she can, while a reluctant romance soon starts to bloom between them. The son of the owner likes Ok-hee but she has set her standards much higher, and continuously tells him off.

The situation of the family takes a rather harsh melodramatic turn when the first daughter completely despairs, Soo-eob fails the exam, Ok-hee is cajoled by a swindler and Choon-sam is hit by a car. Both they, however, and the people who care for them step forward at this rather difficult time. 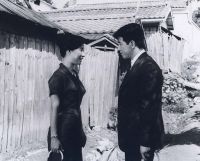 Kang Dae-jin directs a genuine melodrama, focusing on a family that seems to have nothing working in favor for any of its members, and particularly Choon-sam, whose whole life is dedicated to seeing his children becoming happy. At the same time however, the difference in his attitude towards his daughters and his sons is rather evident, in a very eloquent comment about the patriarchic tendencies of the then previous generation.

The second major comment the film makes regards the ways the rapidly transforming Korean society of the 60s left a number of people who could not keep up, in the margins of society, essentially leaving them to fend for themselves or die. At the same time, and particularly through the character of Ok-hee, Kang also makes a comment about the rapid westernization of the youths of the time, with the critique of the tendency being rather harsh, as much as the praise for the traditional values, such as dedication, persistence, and kindness, as mirrored in the characters of Suwon-daek and the owner's son, is intense.

In that setting, melodrama quickly takes over the narrative, despite the relative hilarity of its beginning, with the tragedy that hits every member of the family being rather on-the-nose, with blights each one faces "representing" a specific comment. However, that the ending is quite optimistic and in somewhat realist terms, tones down this aspect, while also making an indirect comment about the ways Korea (as mirrored in all the protagonists) will eventually overcome its problems and triumph.

Lee Mun-baek's cinematography is excellent in framing the different settings the film takes place in, with the antithesis of the rundown house of Choon-sam with the aristocratic one Suwon-daek works in and the places Ok-hee frequents adding much to the narrative. The many close-ups, which, most of the time, focus on Choon-sam may be somewhat overly melodramatic, but they are on par with the overall aesthetics of the movie. Kim Hui-su's editing induces the film with a relatively fast pace through a rather quick succession of scenes, that adds to the entertainment it offers in mainstream terms.

The acting is another of the movie's great assets, with all the cast portraying their roles with gusto. Kim Seung-ho-I as Choon-sam is the definite protagonist and his portrayal of a man who loves his children and Suwon-daek but cannot help getting over his financial situation and the ways of the previous generation, anchoring the film in the best way. Shin Young-kyun as Soo-eob is also very convincing as the failing, good son while Um Aing-ran gives another great performance as the "lost child", Ok-hee. Hwang Jung-soon's playful and always kind Suwon-daek provides a very welcome distraction to the drama that permeates the narrative.

"A Coachman" could not stray away completely from the "bonds" of the melodrama, but still manages to emerge as an impressive film, that highlights its comments eloquently while also thriving on presentation.