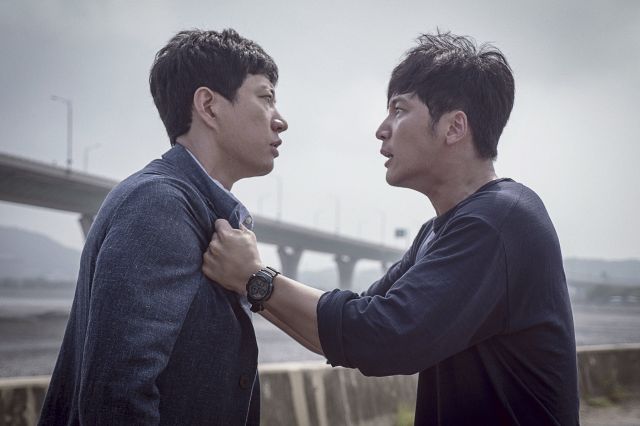 Joon-yeong (played by Kim Myung-min) is a world-famous doctor who struggles to make time for his daughter Eun-jeong (played by Jo Eun-hyung). His day, as seen in "A Day - 2017" is a pretty good example of how and why- Joon-yeong is easily distracted by medical emergencies, is very patient, and underestimates how much time it takes him to do something. These failures are thrown into sharp relief when a bizarre incident forces Joon-yeong to chronically relive those failures.

"A Day - 2017" is a fairly standard high concept thriller. The main fantasy conceit that sets the story off is never really explained, so I'm not going to get into the specifics of it either. It functions solely as a storytelling device meant to force Joon-yeong into a crucible. Joon-yeong attempts to solve the dilemma of Eun-jeong's fate logically by using his knowledge of the situation to try and recreate a perfect outcome. It's the kind of approach you would expect from a world-class doctor. Disease, after all, has no emotion, does not think, and acts predictably.

But that's not the problem Joon-yeong is trying to solve. Observe how from the very beginning, the main obvious way of solving the problem is cut off from Joon-yeong because Eun-jeong, surly pre-teen that she is, has tired of Joon-yeong's constant excuses. It is only through chronic failure and desperation that Joon-yeong is eventually able to make some headway through an emotional plea to Eun-jeong that finally hits just the right note of sincerity.

This false victory is badly compounded, though, by the presence of other human actors. From there...well, we're mainly left as to trying to decipher the mystery of why the person who has apparently prompted the fantasy storytelling advice is acting the way that he is. As a mystery this part of the story is not all that satisfying, mainly because we get no hints or clues about Joon-yeong's backstory aside from "famous doctor" or "bad father" until fairly late in the movie.

For most of the movie we can only really identify with Joon-yeong in the "flawed man trying to save someone he loves" role. This does work decently as well as a parallel with Min-cheol (played by Byun Yo-han), another man in a similar situation as Joon-yeong who attempts to solve the problem with much more subversive and eventually even violent actions. Although again, the sheer lateness of this exposition gives this theme surprisingly little time to resonate.

Everything "A Day - 2017" does when it comes to concept is pretty solid. In the moment its more emotional moments can even be genuinely touching. Unfortunately, by trying so hard to balance cleverness with emotional drama, writer/director Jo Seon-ho is only able to do an above-average job with both. While noticeably and obviously superior to the many movies that fail spectacularly at both tasks, "A Day - 2017" is ultimately let down by its own limited scope. While I wouldn't go so far as to call this movie forgettable, its strengths are generic rather than outstanding.