[HanCinema's Film Review] "A Diamond in the Rough" 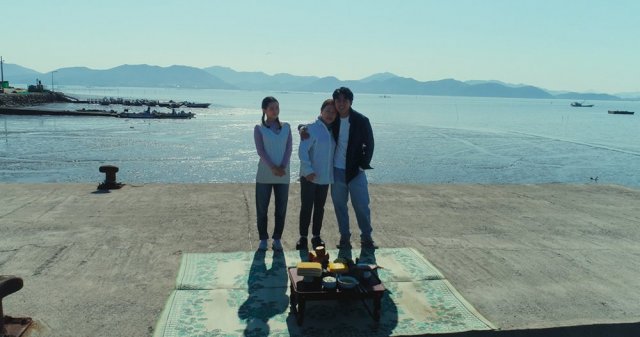 We know that Ki-kang (played by Son Ho-jun) isn't going to have a great time straight from the opening when the older version of the character (played by Jung Ho-bin) starts a speech for a bunch of prisoners about how his time in prison filled him with regret. Then the story flashes back thirty years, to when Ki-kang was just a dumb teenager living in an obscure island off the coast of Mokpo. Right away we get contrasts. Ki-kang might be a troublemaker, but he does have heroic moments.

Mainly in thatKi-kang sticks up for his friends even if his ideas are always terrible and illegal. Ki-kang's chief positive guidanceis his mother Soon-ok (played by Kim Hae-sook), less in the sense that she can actually influence his behavior and more because in his mother's presence Ki-kang is capable of feeling shame. That aspect of their relationship, alongside the prison opener, builds up an inevitable sense of dread when Ki-kang runs off to make his fortune in Seoul.

"A Diamond in the Rough" pulls no punches when it comes to Ki-kang's spiritual degradation. We see him start to act like a gangster, not because Ki-kang actually knows any gangsters, but because he finds the instant rewards gratifying. It's a neat contrast to the more recent "Double Patty" which saw a simpler, more morally grounded country bumpkin far more successfully resist the lure of thug life in the city because he felt no need to prove himself clever.

Once one of Ki-kang's schemes inevitably goes horribly wrong, the kid's checked out. Ki-kang fails to adjust to prison life because he resents the idea of not being charge as well as the implication that he's a failure. You can probably guess what happens next. "A Diamond in the Rough" is not a surprising movie by any means. It's actually pretty functional in depicting Ki-kang's rather rote rise and fall, every scene leading to the next logical step of the redemption narrative.

So I'm not giving screenwriter Kim Chang-woo much credit in the original screenplay department. But I do have to give director Kang Ji-eun credit for crafting a compelling aught style melodrama, where the predictable structure actually ties in quite well with the sense of foreboding doom. Ki-kang is an excellent exemplar of the concept of cringe. He is the shame of our past years, trying to live his life as if he were cool and never appreciating that outside his closest family and friends nearly everyone just thinks of Ki-kang as an obnoxious pest.

This ties well in to the humility necessitated by Ki-kang's redemption arc, where he finally stops trying so hard to be the protagonist of the story and finally comes to appreciate the people who care about him. Kim Hae-sook doesn't have much screentime, but successfully looms large over the story as Ki-kang's unwavering support whose tragic flaw is her passive personality's inability to serve as a stronger authority over Ki-kang's behavior. As the elder Ki-kang weeps over his lack of appreciation, so do we.