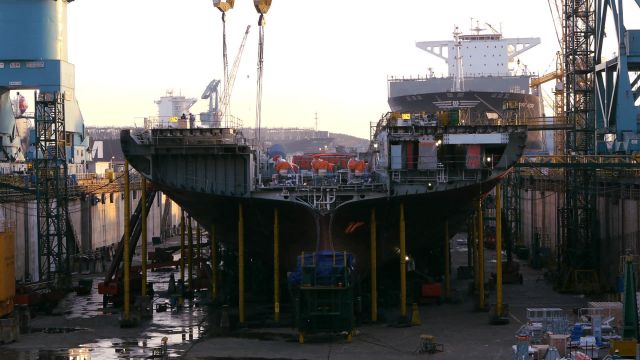 You know what's really weird? Whales. They're these huge underwater behemoths. That's pretty mysterious. Almost as mysterious as Tibetan Buddhist chanting, which also takes on otherworldly aspects. Having established these two obvious points, director Kelvin Kyung Kun Park moves on to what he really wants to showcase as strange- the dark all-powerful God of industrial metalworking who's responsible for almost everything in modern society. A horrific deity whose followers invoke visually and aurally bizarre rituals for the sake of building our own gigantic seaborne leviathans.

"A Dream of Iron" isn't really a narrative documentary so much as it is just a series of abstract images of daily life at the metalworking plant. This is actually a lot more interesting than it sounds, because everything that happens there is kind of overwhelming in just how huge it is. Gigantic burning cauldrons, big sloppy heaps of metal, endless hallways of apparently random junk. And every so often, a tiny antlike human whose job it is to manage all this huge machinery.

The documentary doesn't really take a positive or negative stance on any of this. The narration, while at times mystical, mostly just treats the images as a part of everyday life, which makes sense because that's exactly what they are. All the same, as essential as this manufacturing process is to our everyday lives, chances are you've never actually seen anything like it. "A Dream of Iron" is quite literally the story of the modern world, taken from the base production level. And it looks just plain weird.

If you don't believe me just take a look at the photo gallery. Now imagine all these bizarre pictures given context. Not stories, just context. We actually see the metal get molted, the ship get built, the pyramid constructed. Yes, there's a pyramid involved. It's another queer byproduct of an industrial process with which most people have no familiarity. The divine proportions to which the titular "A Dream of Iron" aspires are hard to deny when coupled with the obvious metaphorical implications of us creating our own pyramids.

The basic argument the film makes is that even if industrialism isn't literally our religion it might as well be. An insane amount of resources are consumed for the sole purpose of industrial manufacture. Even if we do get actual stuff out of the deal all it really takes is a musical voiceover to sell the idea that this is artistry in motion. Scientists may go on about the theoretical wonders of the universe, but that just can't compare to the majesty of seeing the process in action.

"A Dream of Iron" is an exceptionally strange product. It's a religious documentary without the religion, or even the people. And to be fair, at times it feels like a slog. An appropriate enough feeling, for anyone who's ever had to sit through a boring church service. All the same, there's definite spiritual power here that resonates if only through sheer form. Director Kelvin Kyung Kun Park has manufactured his own impressive product here- "A Dream of Iron" isn't so much an idea to be discussed as it is an event to be witnessed.

"A Dream of Iron" is directed by Kelvin Kyung Kun Park

"[HanCinema's Film Review] "A Dream of Iron""
by HanCinema is licensed under a Creative Commons Attribution-Share Alike 3.0 Unported License.