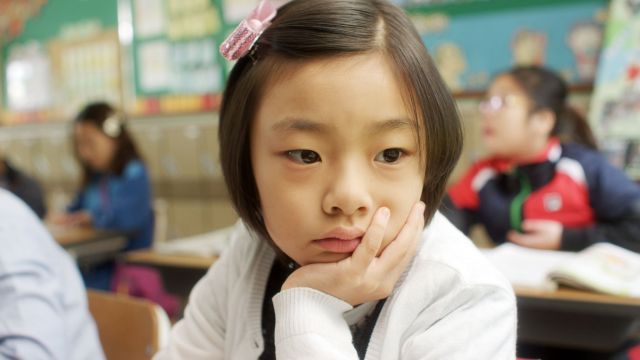 The Korean title of "A Field Day" literally means "exercise meeting" and has multiple contextual interpretations. It can refer to a sports festival at a school. It can also refer to labor action. It can also refer to political protests. The point is, "A Field Day" is a day when you exert yourself to win. That's the moment the movie is building up to, when for various convoluted reasons, husband Cheol-goo (played by Yang Ji-woong), wife Mi-soon (played by Lee Jung-bi), brother-in-law Min-seok (played by Choi Hyuk-I), and father Soon-dol (played by Park Chan-young) find themselves aligned with different factions in a labor strike.

This is not a fact made obvious by the marketing at all. It depicts elementary school age daughter Seung-hee (played by Kim Su-an) as the main character, spurred on by her quest to win the three-legged race at the school sports festival. Seung-hee is actually not that important, except to the extent that the adults responsible for her get so wrapped up in their own storylines they lose track of what Seung-hee is doing, each assuming that one of the others is watching the little girl in their absence.

Don't worry, Seung-hee is never actually in any danger. The main irony being highlighted is that the adults are the ones in trouble, because they don't know what they're getting into. Cheol-goo ineffectively tries to play labor mediator while Min-seok is pushed into desperation by how his non-union job refuses to pay him in a timely manner. Mi-soon and Soon-dol, left increasingly lonely in this enviornment, end up looking for friends in all the wrong places.

All of this is used primarily as fodder for jokes- and funny ones at that. Cheol-goo and Min-seok are so consistently dorky they look completely out of step trying to attempt to do anything serious. Soon-dol has elderly gravitas, which weirdly enough ends up getting turned against him when some nice guys come up with a truly bizarre task that apparently only old people can do. The nice people in Mi-soon's life are just too nice in general. She can't say no to them, because they appreciate her.

Even the one-off jokes are quite strong. I liked the bit of lovemaking with its rather untimely interruption. The theme music from "Robot Taekwon V" makes a surprisingly relevant appearance. And who doesn't love an angry mob that just starts chasing after the main characters on general principle? The whole situation is such a glorious mess that I couldn't help smiling at the sheer relatable absurdity of it all.

Because that's what emotional and financial insecurity looks like. You just have to grasp at whatever less than ideal opportunity presents itself, and have the sense to back out of said less than ideal opportunity when it's something different than expected. Of course, by the time the ending rolls around, the financial insecurity issue remains unsolved. But the five central characters are now indisputably a family again. And really, isn't that what really matters?