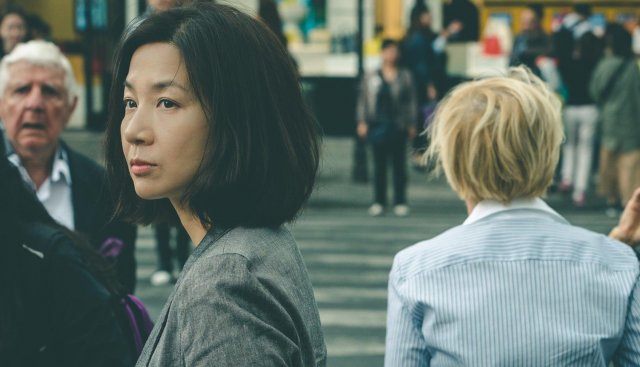 In present day France, Mi-ra (played by Kim Ho-jung) has finally had enough of her husband Jules (played by Alexandre Guanse), a man who we are quickly led to believe is an unsympathetic philanderer even as he earnestly insists their issues can be resolved. We then see Mi-ra return to Korea, seeing old friends for the first time in decades. The culture shock is a bit much, which possibly explains why Mi-ra is always meeting her friends in Western-style bars.

Except that we then see Mi-ra meeting her friends in flashback in Western-style bars too. As it happens, Mi-ra is a fairly specific type of would-be cosmopolitan Korean woman. She hung out with bohemians, and while these Korean bohemians remained behind to develop their careers, Mi-ra herself went back to the real Bohemia. Not literally of course. But then the general association with continental Europe as being a place where cool people can be unconventional as they please is, well, it's a big part of the ethos of someone like Mi-ra.

"A French Woman" is an extremely specific movie like that. It only really makes cultural sense to a person from this particular Korean cultural milleu that tends to be dominated by women who want to be both unconventional and respectable. The inherent contradiction of these two desires drives much of the conflict in "A French Woman" as Mi-ra looks back on her life and tries to figure out what went wrong.

Weirdly enough Mi-ra's own actions don't really relate to this as she never really does anything. Mi-ra is a largely passive observer even with regards to her own life decisions. This excellently contextualizes the early scenes with Jules. Although for a ninety minute movie, I was surprised at just how meandering "A French Woman" felt. We only really get to see Jules in the final stretch of the film, even though he's such an important character to understanding the retrospective the movie drags quite a bit until he re-enters the story.

Other stronger elements that only make a late appearance are some horror genre trappings. "A French Woman" frequently messes around with perspective in that it's often unclear whether Mi-ra is having dreams, flashbacks, or genuine supernatural experiences. While we can tell from the beginning that Mi-ra is not well mentally, the dull expository sequences of the film rather understate just how destroyed Mi-ra's world is and how that's warped her sense of self.

I can partially read this construction as intentional, since it does rather effectively punch up the tension when the story hits its more dynamic high notes later on. But even that favorable reading just brings more obvious flaws to mind. The copious bar scenes, for example, were probably intended to be read as claustrophobic dank locations, but without later context the banter in those moments is just light-heartedly boring and long-winded enough to undermine that interpretation. Still, "A French Woman" does manage to end strong, rendering the overall flick reasonably above average.