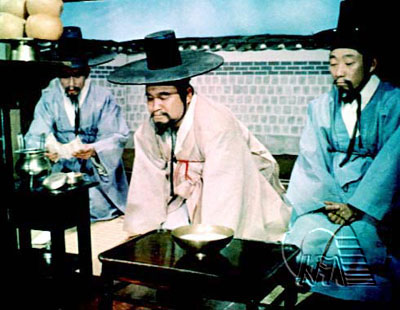 The second adaptation of of the comic fable written by O Yeong-jin in 1942 and originally performed as a stage play in 1944 (preceded by "The Wedding Day") "A Happy Day of Jinsa Maeng" is essentially a melodrama filled with social commentary posing as a comedy, and also a rare occasion for a Joseon costume movie, that takes place also in a studio.

Maeng Jinsa is the patriarch of a village household and also a craven, cunning man who constantly tries to elevate his family's social status (which is quite low due to his ancestors being merchants and clerks) by any means possible, mostly involving lying. His efforts, however, have brought him success, since he has managed to arrange for his daughter Gap-boon to marry Mi-eon, the son of Minister Kim. Maeng decides to visit Kim's mansion in Bellflower Village, but his cowardice results in him sending his servant to check the situation, with him only being able to check the servant quarters, and not actually meet Mi-eon. Due to this decision, Maeng does not meet his future son-in-law either, and therefore, when a rumor starts circulating that the young man is a cripple, his plans are shattered, while his wife and daughter, who were previously filled with joy for the upcoming marriage, are even more devastated. Not willing to let things ruin his plans, Maeng comes up with another scheme, of having one of the maids of his house, Ip-boon, marrying Mi-eon, despite the protests of the girl. 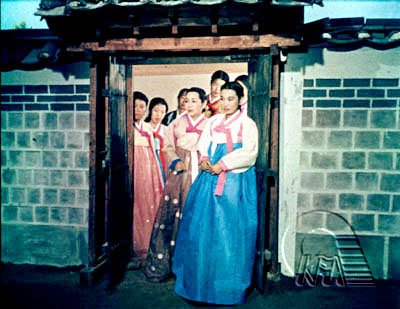 Lee Yong-min directs essentially a fable, filled with jokes mostly deriving from the attitude of men, and particularly of the grandfather, whose senility and lack of hearing is rather hilariously portrayed by Kim Hee-kap, and Maeng, whose mischievous ways and coward acts follow the same path, in another excellent performance by Kim Seung-ho-I. At the same time, however, and despite the seemingly comedic approach, Lee makes a number of comments about the way society worked at the time, with the fact that Mi-eon is considered a rather desirable groom until everyone learns that he is a cripple, resulting in even the lower-caste Gap-boon does not even wishing to indulge in the possibility of marrying him, being one of the most central ones. The ways the value of each family was measured, mostly based on the profession of the ancestors is another comment, while the whole concept of patriarchy is essentially mocked here, through the father and grandfather, whose ways are revealed as those of buffoons, essentially from the beginning.

Lastly, as the film aimed at commercial appeal, some melodrama could not be missing, with the queen of the genre in the 50s and 60s, Choi Eun-hee, being the main medium as Ip-boon, in another convincing, if somewhat excessive performance.

Also of note is the way the color of the movie is implemented, with Lee choosing a scheme that makes the movie look as motley as possible, with the intensely bright yellows, reds and greens filling the screen through the costumes at all times, but most of all during the various exterior shots that include dancing and singing. His own cinematography is quite good in the regard, with the focus being obviously on impressing the audience, but the set design is filled with faults, highlighting the low budget of the production, at least in comparison to Shin Sang-ok's films, since it becomes painfully evident that the backgrounds inside the mansion are painted instead of actual ones. 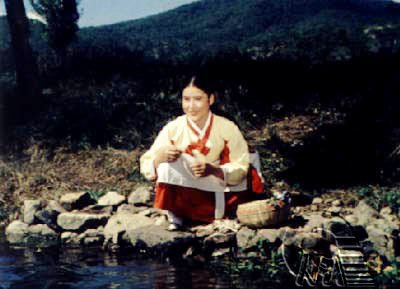 The editing bu Yu Jae-won implements a pace that suits the mainstream aesthetics of the movie; at the same time, however, at over 2 hours, the movie definitely overextends its welcome, as the repetitive nature of the jokes becomes tiring after a fashion, and the story is not enough to justify this duration.

"A Happy Day of Jinsa Maeng" has its moments, and the combination of comedy with social commentary is quite good. However, the duration, a number of artistic choices and the repetitive nature of the narrative deem it a mediocre title.