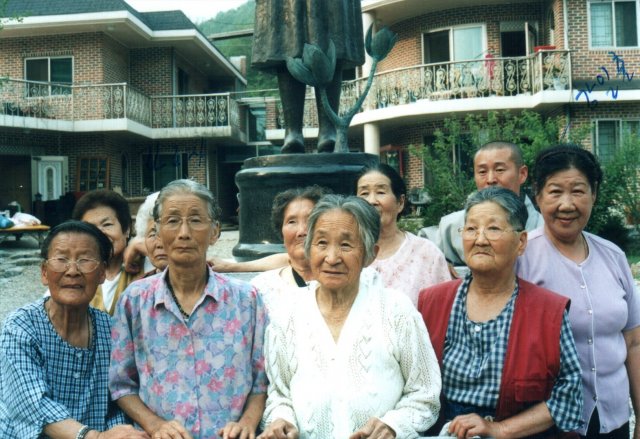 Though director Lee Seung-hyun is only thirty years old, he draws on a wealth of footage taken from his own lifetime to put together "A Long Way Around", a documentary depicting various comfort women as they emerge from obscurity in the early nineties. The reason why they pop up then is because that's when the experience of wartime prostitutes under the Japanese Empire became a nationalist issue in South Korea. And by that time, they were already starting to die of old age.

Consequently much of the footage in "A Long Way Around" is quite crude and not profesionally produced at all- because it wasn't. Though the film itself doesn't explicitly spell this out, it's clear that director Lee Seung-hyun had to go around to the social circles these comfort women hung out in and ask if they had any camcorder videos of their daily lives or public events. This gives much of "A Long Way Around" a home movies kind of tone- even the footage director Lee Seung-hyun took himself is of dubious quality.

Bizarrely enough, that's probably the single most disturbing aspect of the documentary as a whole. Japanese nationalists often claim that Koreans, and other peoples, foment the comfort woman issue just to stoke racist sentiment of Japan. But seeing former comfort woman in their current everyday lives...there's no conspiracy, no polish, no apparent agenda. All we see in "A Long Way Around" is a bunch of lonely old women who don't even much like talking about their past experiences.

The things these women don't talk about are fairly illuminating. One sequence that sticks out in particular is when the women are being asked about their marriages and families, or lack thereof- and the answers are extremely evasive. The subtext is pretty hard to miss. Sexual slavery effectively rendered men permanently repulsive to these women. They survived that experience, and that's what they'll keep doing- is surviving.

Until they can't anyway. Another dark moment is the final credits sequence, which includes a full list of all the comfort women who appeared in the movie. Most of them are now dead, and it's only a matter of time before the rest are too. So what can these woman even want? What does an old woman want, living in her tiny room, apparently disinterested in any kind of luxury? They want an apology. That's it. They don't even seem to want it that forcefully, but that's mainly because they don't seem to think they'll every actually get one.

"A Long Way Around" is an appropriate enough title. It's a documentary that's less about getting into a discrete history of the Japanese military brothels themselves or the comfort women movement and more about inspiring empathy by providing a stark reminder that the comfort women themselves are just normal old ladies. They're the kind of people you could pass by in the street without looking twice at. By being so unremarkable, they all the more deserve to be heard.

"[HanCinema's Film Review] "A Long Way Around""
by HanCinema is licensed under a Creative Commons Attribution-Share Alike 3.0 Unported License.