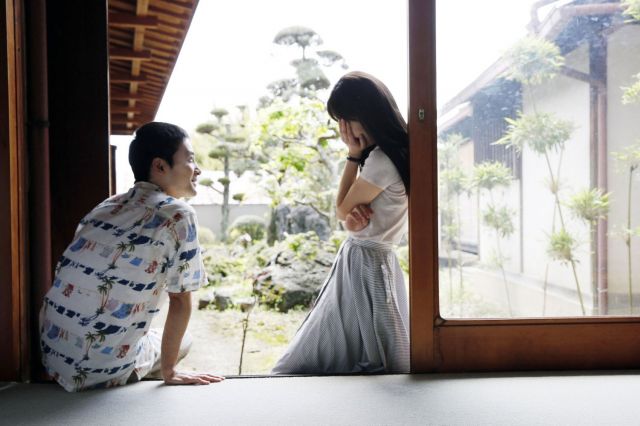 Sometimes it seems like every time I think every form of meta film commentary's been done, another weird angle pops out of the woodwork. With "A Midsummer's Fantasia", that commentary is on location scouting. Technically speaking most location scouting these days is done according to tax incentives. And realistically speaking "A Midsummer's Fantasia" was obviously produced the same way. The project was spearheaded at the Nara International Film Festival, and as it happens the location on display here is Gojo City, a picturesque town in the Nara district of Japan.

But let's ignore the cynical angle for a moment. If you're into beautiful filmic shots of faraway places, writer / director Jang Kun-jae has you covered. Gojo City is just, well, really pretty to look at. Even though the first half of the film is shot entirely in black-and-white, there's a sort of simple charm in a town that was able to maintain it's more quaint, aesthetically pleasing traditions for the sake of luring in turists. If I had to choose one place in Japan to travel to this year, I would probably go to Gojo City.

This point is also literally illuminated in the meta-narrative. The black-and-white portion of the film is about the location scouting. The color portion is a film that was presumably produced by the people who were doing the location scouting in the first segment. Subtle reminders are fairly constant- like how subtle details of the town or even random hallucinations make reappearances in the more properly filmic tale that's presented in living color.

There's just one problem with all this. The story is obviously not real. The entire framing device makes it quite clear that the color story is an imaginary one. Let's ignore for the moment the fact that pretty much all movies are imaginary stories. Most movies at least pretend to be real, and yet "A Midsummer's Fantasia" goes out of its way to tell us that location scouting created this love story, and that this love story is in fact a complete lie. What could this mean?

...I have no idea. That's the problem with meta-narratives, really. Every so often they get so clever it's impossible to tell what point they're trying to make unless you're doing academic style research. As far as the simulacrum of film goes, "A Midsummer's Fantasia" is a pretty accurate representation of what we all think random getaways into foreign countries should look like. Personally speaking my deep, insightful, vaguely romantic conversations with strangers never leave much of an impact in memory.

Ah, but that is the point of film is it not? To create a false reality that seems more true than the real thing. To some extent that's certainly an admirable attitude- goodness knows the fake has to put in a lot more effort to be something that it's not. In any event, you don't really have to analyze "A Midsummer's Fantasia" if you don't really want to. This is a perfectly fun movie just to look at, and absorb the ambience. It might not be a real vacation, but even so. Does it really matter?