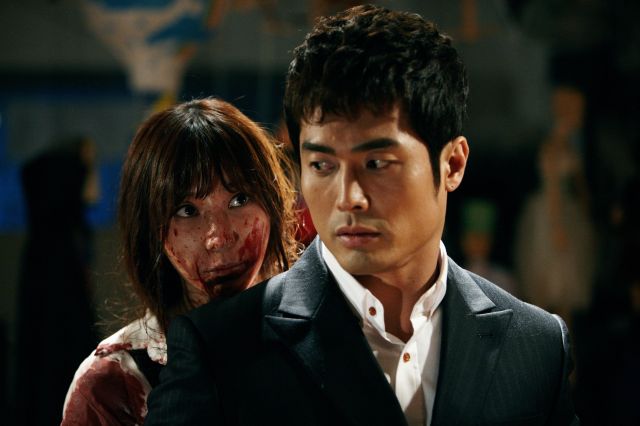 Throughout this film, leading man Ji-hoon engages in sex acts at least a dozen times. There are countless deliberate shots of his abs, and even as a man I have to admit actor Lee Jong-soo has a great body. And yet Ji-hoon has to rank as one of the most pathetic characters I've ever seen on-screen. Ostensibly, the story is about him abusing hypnotherapy for selfish ends- but I constantly found myself wondering exactly who was actually puppeteering who.

Actress Koo Ji-sung plays the role of a shy, affectionate woman named Hyeon-jin who's having mild difficulties in her relationship because of past trauma. She also does a good turn as Hyeon-jin's darker side, who rather than react in a helpful way to Ji-hoon's attempted treatments, instead deliberately needles him about his own insecurities. When he finally gives in, she gleams. But it's quite some time before it's clear how she's won, and how little of this victory actually has to do with Hyeon-jin.

"A Puppet" is an allegorical tale. There's no real supernatural elements. Most of the implausibilities are logistical ones. But there's a lot going on that's deeply discomforting. While the camera invites us to admire Ji-hoon's body, his actions underscore the kind of man he is. Ji-hoon seems like he's in control, and seems like he's smart, but however much he rattles on about Freud it's clear that he's a very sad, limited man who has no idea how to deal with any situation not explicitly covered in a textbook.

The score, punctuated largely by simple piano pieces, sometimes feels low-budget. But it's actually quite appropriate for the fairly shallow emotions on display. The opening scenes are orchestrated with a deliberate simplicity. As we see the everyday adventures of a romantic couple, we're invited to judge them, and their awkward laughs, as not being genuine lovers. I was rather humbled as the film went on, since the supposedly adult, highly nude scenes we're treated to afterwards quickly prove to be infinitely more puerile.

In several parts of this film I actually laughed. It's not that the film was funny, exactly, but it just hits the worse parts of human nature very well. While Ji-hoon constantly acts and reacts in a selfish and shallow way, he's never really aware of what he's doing or just how ridiculous he sounds or looks. After a while, I just started to feel sorry for all the people who decided he was trustworthy. It's not that Ji-hoon's a bad person- he's just so non-reflective that at best he's an emotional teenager. From there, his fate is nearly inevitable.

While the surface of "A Puppet" is highly sexually charged, there's a surprisingly effective parable in here. It's well worth the time of anyone who's interested in a more serious analysis of trauma and lust than what goes into the typical sexual passion flick. A cynical eye toward the genre may even be preferable, given how clear it is that all the sex we're seeing is pretty mundane, even if it has flashy trappings. This film, more than any other I've seen, demonstrates the malignant ignorance necessary to mistake love for passion, and how it's only our own quality of heart that can help lead us to the right choice- not any external excuse.