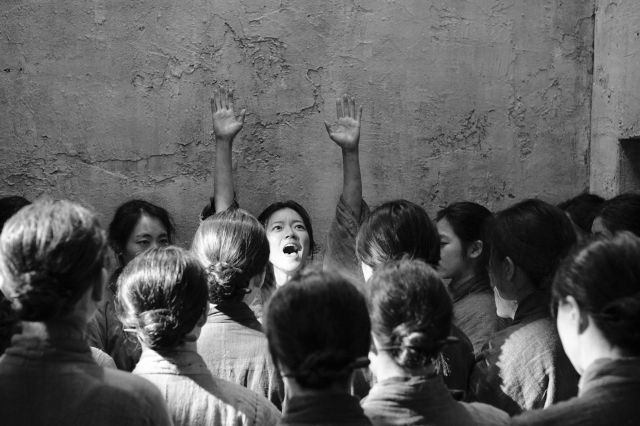 Yu Gwan-sun (played by Go Ah-sung) was a real-life organizer in the March 1st Movement. Interestingly, writer/director Jo Min-ho does not depict Yu Gwan-sun's participation in that event so much. We do get a few full color scenes of Yu Gwan-sun with her family. But for the most part, "A Resistance" is the story of Yu Gwan-sun's life in prison following her arrest, set in bleak black-and-white as Yu Gwan-sun's patriotism is contrasted with her inevitably suffering for expressing it.

"A Resistance" makes no effort to sugarcoat Yu Gwan-sun's experience. She is fully depicted as a headstrong teenage girl who clearly and fully understands that her best chance of surviving for the next three years are to keep her mouth shut. Yet every so often, Yu Gwan-sun has an impulsive moment. And even when the consequences of her defiance become clear, Yu Gwan-sun sticks to her convictions and proudly declares herself to be a Korean patriot.

There's one great exchange, with ethnically Korean prison guard Nishida (played by Ryu Kyung-soo) that explains why Yu Gwan-sun does this. It's a matter of freedom. Sure, Yu Gwan-sun is in jail- but she is still a person, as long as she expresses herself. Whereas Nishida is just doing his job. Nishida does what the warden (Lee Yeong-seok) tells him to do, not because Nishida believes it is the right thing to do, but because military discipline compels it.

"A Resistance" is especially stark in demonstrating just why it is that people commit horrible crimes like what happens in the prison. The warden is less an evil man as he is one that believes that the rule of law and brute force are what prove innate superiority. The man has no sense of ethics, and only reluctantly engages in peaceful negotiation with a race of people who he believes to be inferior thanks largely to their antiquated ideology.

The torture scenes are brutal but subdued as writer/director Jo Min-ho focuses on the psychological impact of Yu Gwan-sun's experiences. We see Yu Gwan-sun physically broken down by the end, cheered if somewhat delirious by the mere presence of loved ones. Yu Gwan-sun's sense of solidarity with her fellow prisoners is what keeps her going. While Yu Gwan-sun causes many problems for other inmates by encouraging largely symbolic patriotic action, she feels just as strong a sense of obligation to them.

That sense of solidarity is what made Yu Gwan-sun  a martyr. Yet while "A Resistance" makes Yu Gwan-sun seem heroic, the film does not make her actions feel tolerable. I look at what Yu Gwan-sun and while I could understand why she did, I'm not sure I would ever be able to do the same. It's a shameful feeling, especially coupled with that last lingering shot, as we see Yu Gwan-sun's body finally fail to survive like her spirit did. That moment is truly haunting, and signals "A Resistance" as a fantastic work of film.