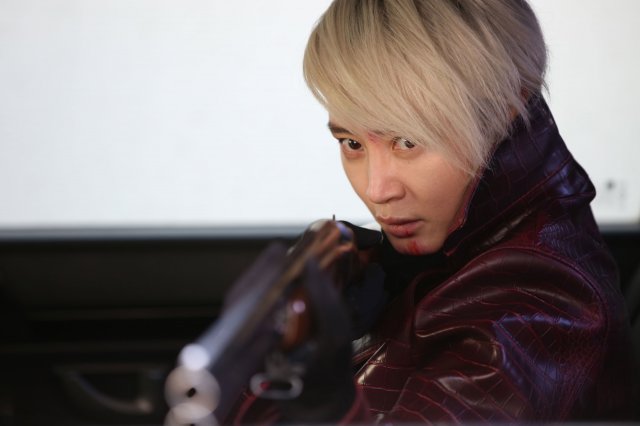 Given the title of "A Special Lady" and the prominence of lead actress Kim Hye-soo in the movie's promotional material, one might think she'd be playing the main character. Well, that's not really the case. She might technically be the initial perspective character, given the extended opening scene where we're just watching old guys gratuitously having sex with prostitutes. Kim Hye-soo's character, Hyeon-jeong, is looking at these videos with no context.

Nothing about that scene, or even reading that sentence, inspires confidence that "A Special Lady" is particularly worthwhile. Having seen the entire movie, I can confirm that impression. Chairman Kim (played by Choi Moo-sung) appears to be running a gangster enterprise centered entirely around blackmailing important people with sex tapes. I'm not being facetious. At one point Sang-hoon (played by Lee Sun-kyun) suggests that maybe they try guns and drugs instead, and Chairman Kim responds to this idea with violence. I mean sex tape blackmail, sure, but guns and drugs? You're crossing a line there Sang-hoon!

Again, I'm not being facetious. As far as I can tell "A Special Lady" is expecting us to side with Chairman Kim over Sang-hoon solely for the sake of these moral scruples. At no other point are we given any reason to see Chairman Kim in a sympathetic light. To the contrary, one character challenges Sang-hoon with the argument that he's completely disposable, on account of the fact that despite Sang-hoon basically running the crime gang the official succession chart still lists Chairman Kim's idiot foreign educated son as the next in line.

Wait wait, my bad, Chairman Kim does have another sympathetic quality. He wants his son to lead a normal life and not be a gangster. Which is kind of at odds with Sang-hoon's insecurity over his position in the gang. There's a shocking failure to communicate that drives almost all of the conflict in "A Special Lady" to the point that I was rooting for Sang-hoon in spite of his clearly being presented as a jerk.

You might be wondering what any of this has to do with Hyeon-jeong and well, I can't actually explain that without spoilers because after the massive sexy surveillance scene Sang-hoon becomes the proper perspective character. Sang-hoon and Hyeon-jeong might have a romantic backstory although this was left frustratingly vague. I suspect I was supposed to interpret Sang-hoon as having imagined his romantic history with Hyeon-jeong although she and Chairman Kim keep so many pointless secrets from him that her lack of acknowledgment is easily interpreted as gaslighting.

"A Special Lady" isn't much better on a technical level. The sex and violence are simultaneously extreme and boring. None of the fight scenes have worthwhile continuity, so there's no tension about who's going to win any given conflict. Even the editing is just plain awful, with Hyeon-jeong being referred to as Mi-ok, the movie's Korean title, without context or purpose. Kim Hye-soo's lackluster delivery doesn't help matters. "A Special Lady" is probably the single worst performance of her career.