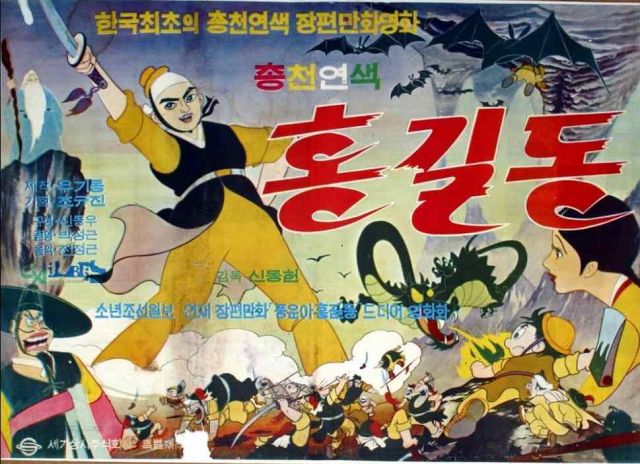 Back in 1967, South Korea released its first feature-length animated film, based on A Story of Hong Gil-dong, a character of the Hong Gil-dong jeon" novel that was written in the Joseon era, who shares many similarities with Robin Hood, particularly in the way he steals from the poor and gives to the rich. The particular version, titled "A Story of Hong Gil-dong" was specifically adapted from a 1960s comic-strip retelling, written by the director's brother Shin Dong-woo-I.

The titular character was born on a day where hurricanes and wicked spirits struck medieval Korea, an illegitimate son of a nobleman, with the baby soon revealing his superhuman strength and intelligence. Eventually, he is cast out of his home, ending up in the forest where he vows to fight injustice. There he is joined by a rather short thief, Cha-dol Ba-wi, and together they fight evil officials and aristocrats who exploit poor people. After a number of incidents, involving saving a tiger cub, in one of the most interesting episodes in the movie, Hong decides that he needs to train more, and searches for a grand master, whom he finds in the face of an old white bearded sage. By the end of his training, he is riding a magic cloud into battle, with his effort against injustice eventually leading to a huge triumph. 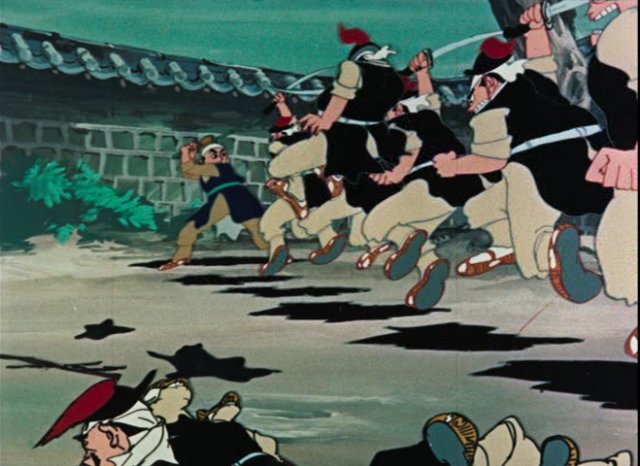 Shin Dong-hun directs a very unusual amalgam, since, apart from the change in narrative style brought by the training sessions, the film also seems to borrow intently from both Disney cartoons and Osamu Tezuka works, in terms of narrative and art form. The dancing skeletons for example and the Robin Hood-esque story seem to point to Western elements, while the flying cloud, the occasionally intense violence, and the slapstick humor point towards Japan. The result, however, is quite entertaining, with Shin combining all the aforementioned elements with gusto, and with a very fitting absurdity that works excellently for the movie, retaining interest from beginning to end, also due to the all-time favorite concept of "the underdog who wins against all odds".

The art form here is also very interesting. The frequently hyperbolic expressions and movements of the characters are bound to make the viewer laugh, while the frantic pace adds much to the entertainment the animation offers. The mixture of speed, hyperbole, humor and absurdness finds its apogee in the battle scenes, which are many as much as they are amusing, in one of the best traits of the title. The character design also follows the aforementioned lines, including the combination of Western and Japanese elements, with Chadow Bawi representing the former and Hong Gil-dong the latter. Lastly, the frequent sudden zoom ins are also amusing to watch, in a style that would make even Hong Sang-soo jealous. In general, the art here is so "wrong" that it ends up as fun to watch as possible.

This is actually the most accurate comment that one could make about "A Story of Hong Gil-dong", which emerges as absurd, illogical and with no particular direction but at the same time as a rather fun movie that has stood the test of time in the best fashion, even if not exactly deliberately.