[HanCinema's Film Review] "A Time for Dogs and Cats" 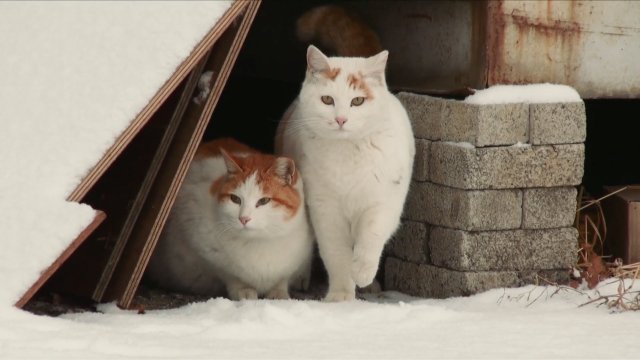 The docuemntary feature "A Time for Dogs and Cats" is less a single coherent documentary as it is a series of individual subjects depicted in vignette form to eventually sort of resemble a documentary. It ends with, of all things, a musical concert for the various wild cats and dogs of Baeksa Village in the northeastern corner of Seoul. The music's good although I'm not sure the animals got much out of it. Animals don't really understand music as far as I know.

Baeksa Village is a recurring location presumably because director Lim Jin-pyeong lives in the area but there are some interesting stories there regarding wild animals in South Korea. Apparently there was a whole incident awhile back involving semi-feral dogs that were abandoned by their owners when a construction project forced them out of their homes. Consequently, the dogs moved to the nearby mountains, breeding amongst themselves and only reappearing presumably to drag food back to their new homes.

"A Time for Dogs and Cats" has a very functional, ecological view of how animals function in an environment like this, and how their living like this really isn't their fault. While no mention was made of plans to spay and neuter these wild dogs we do get an extended explanation of how cats are trapped and then moved to veterinary facilities for mass sterilizing and deworming. It was here I learned why some cats have these odd incision marks on their ears. Apparently Trap, Neuter, Release programs (TNR) use these largely cosmetic scars to identify which cats have already been castrated.

Incidentally, while "A Time for Dogs and Cats" gives a fairly positive overview of TNR programs, and interesting enough to make me want to research them myself, that research is fairly ambiguous. Not everyone agrees that TNR programs are the right way to deal with feral cat populations. Of course, the main alternative school of thought is that cats should just be killed instead of castrated. This obviously doesn't appeal to anybody predisposed to like cats.

And that's the target audience for "A Time for Dogs and Cats", is just people who want to take eighty minutes to watch stories about the lives of feral cats and dogs. The documentary is unapologetically sentimental and it certainly has its moments. There's a very sweet animated setpiece about a boy slowly growing apart from his dog that I imagine most pet owners can strongly identify with.

There's comparatively little substance to these charming setpieces, although on balance I will admit that "A Time for Dogs and Cats" did contain more interesting factoids than other similar documentaries such as "Our Cat" or "I Am Cat". All these movies are a novelty format for the popular genre of animal documentaries on South Korean television. One such television documentary, Animal Farm, even has clips featured here. If you want more programming in a similar vein it's easy to find yet at the same time such programming really just emphasizes how "A Time for Dogs and Cats" is nothing all that special.

"[HanCinema's Film Review] "A Time for Dogs and Cats""
by HanCinema is licensed under a Creative Commons Attribution-Share Alike 3.0 Unported License.