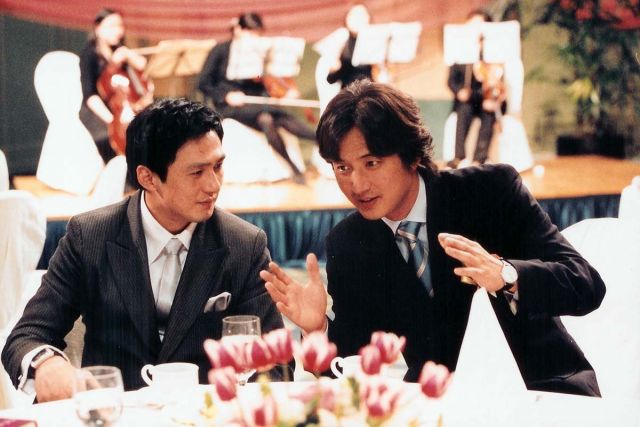 Dong-hwa (played by Jung Joon-ho) is following his dream in life to be a famous writer. Unfortunately Dong-hwa can't write for snot. Once family, friends and fate have conspired to make Dong-hwa surrender what little of his pitiful pride remains, the man reluctantly takes on a job as ghostwriter for Man-cheol (played by Son Chang-min), who has led a fairly interesting life. We start to see "A Wacky Switch" take place as it becomes clear these two have talents the other would find useful.

"A Wacky Switch" is fully aware of the silly wish fulfillment nature of its premise and director Jeong Hyeon-won is smart enough to never pretend otherwise. The tone is well set when Man-cheol tells Dong-hwa the metaphorical secret behind his success in life. Dong-hwa, idiot that he is, interprets this advice literally and rather incredibly, starts to impress all of Man-cheol's business associates in short order. Dong-hwa is so stupidly confident that he gains the superpower of ultra-competence just through sheer mental powers.

Man-cheol is...less satisfyingly developed. Honestly, it will probably improve your viewing experience to know ahead of time that Man-cheol is a legitimately chill dude, because "A Wacky Switch" is not a movie that is improved by plot twists in any way. Multiple running gags involve Dong-hwa engaging in petty revenge against people who slighted him in the earlier part of the movie, and we laugh because they're jerks who deserve it.

In many ways Dong-hwa is the perfect gangster protagonist. He puts zero thought into how a gangster enterprise works, focusing entirely on proper ambience and scripting, and since being an effective gangster consists largely of being able to intimidate people, Dong-hwa's plans succeed again and again. I kept thinking I was going to get tired of all Dong-hwa's winning, then he always manages to say or do something at the last minute to reveal what a clueless pseudo-intellectual he really is.

What makes this so funny is that right until the very end Dong-hwa genuinely believes every random unplanned utterance that comes out of his mouth. While not the most sympathetic protagonist, it's easy to identify with Dong-hwa the loser at the start of the movie. While he never really sacrifices his pride, there is, at least, an eventual realization on Dong-hwa's part that he and Man-cheol are expecting completely different things from the creative process. And that's OK. Dong-hwa and Man-cheol become friends and compatriots because they're willing to be broad-minded with what they want in life.

Granted there is some moral culpability in how Dong-hwa's true desire in life is just to be a bully. I kind of feel like I should hate him for that, but Jung Joon-ho is so genuinely adorable here that even the gangster life ends up coming off kind of harmlessly. It's all about might makes right, and Dong-hwa is left fumbling around trying to figure out where justice ends and pettiness begins. All the characters have to navigate this fine distinction, and that makes their double takes upon realizing they've gone too far all the sweeter.