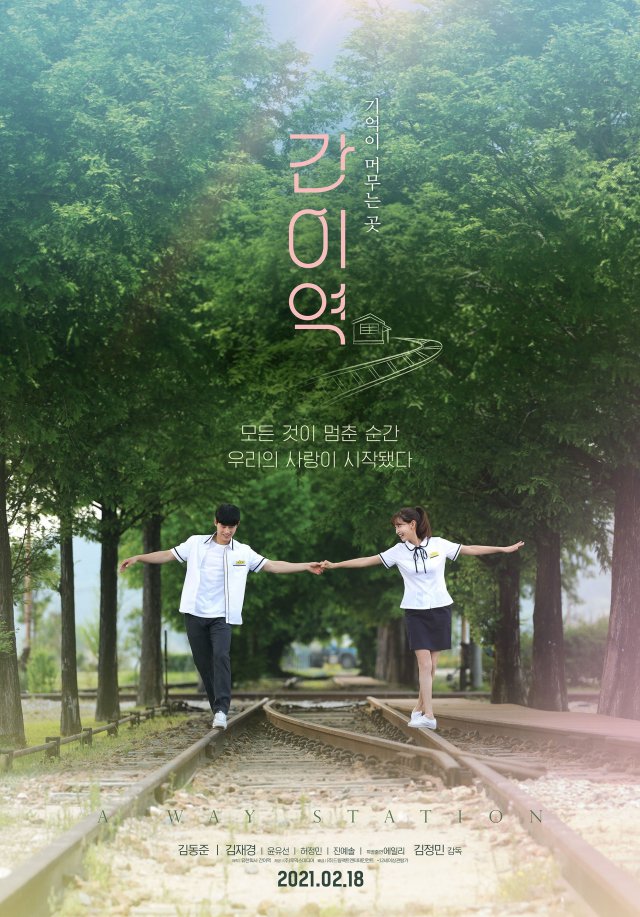 For quite some time in "A Way Station" it's not made explicitly clear that the film is a melodrama. We just have Ji-ah (played by Kim Jae-kyung) acting the role of an unremarkable salarywoman, in an oddly chaste-seeming relationship with her office boyfriend Seok-jin (played by Shin Ji-hoon). It's only over the course of a fairly awkward birthday dinner that we find out the horrible truth behind Ji-ah's medical condition, as she mulls over how to spend the rest of her limited time.

"A Way Station" is at its best when its simply being a drama about getting a cancer diagnosis young. That Ji-ah is not a particularly interesting character somewhat perversely works to the story's benefit. It's very easy to identify with her living day by day with no real purpose, and thus seeming oddly numb to the idea that her life is going to end. Ji-ah is neither enraged nor is she particularly sad. She simply persists one weak smile at a time, having accepted her own mortality.

This part of the narrative goes on for so long that I was honestly a little surprised when the movie moved on to proper romantic melodrama territory, with Ji-ah's relationship with her longtime friend Seung-hyeon (played by Kim Dong-jun) coming into focus. Now, you might be thinking to yourself, wait, didn't the first paragraph say that Ji-ah had a boyfriend? And yes, yes it did. Ji-ah breaks up with him rather unceremoniously in one of the film's more genuinely affective moments.

I doubt this was intentional. Seok-jin is just a very pitiable character. It's clear that he always liked Ji-ah more than she liked him, and that's a pretty brutal way to find out, learning that with her days numbered, Ji-ah would rather not spend them with Seok-jin. This is such a powerful arc that by just abruptly dropping it, writer/director Kim Jung-min-XIII made it very difficult for me to properly identify Ji-ah and Seung-hyeon as a proper couple.

Matters are not helped by another brutal midpoint scene, where Seung-hyeon attempts to romanticize Ji-ah via extreme cliché and she responds with sincere revulsion, much as nearly any woman would do in a situation like that. All these elements, from Ji-ah's banality to Seok-jin's existence to the initial emotional distance between Ji-ah and Seung-hyeon, undermine the movie's inherent melodrama. They're good story elements but they feel cheapened being used in service of a typical romantic melodrama, where they just bring unwanted conflict with the tone.

Eventually "A Way Station" gets its bearings straight. But until then the movie just meanders in a frustrating way that obfuscates its most important elements as a genre flick about the realization of lost love. We barely get any discussion either of the school days of the lead characters or Seung-hyeon's memory issues, despite these aspects being essential both to their shared relationship as well as Seung-hyeon's character. "A Way Station" gets the job done as a tear-inducing melodrama but it could have been so much better.