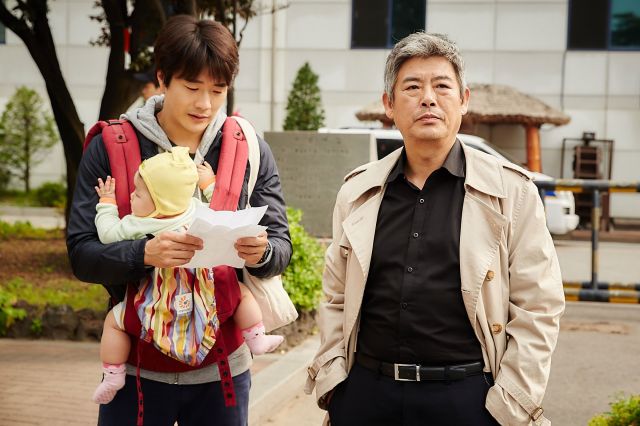 Dae-man (played by Kwon Sang-woo) loves mysteries, and blogs about them. Unfortunately, Dae-man has struggled to turn his passion into something that actually pays money, and runs a rental shop in order to make ends meet. The situation is even worse than it sounds, because Dae-man also has a wife Mi-ok (played by Seo Young-hee) and two children, one of whom is still a baby. Meanwhile, detective Tae-soo (played by Sung Dong-il) has been shut out of his own department for wanting to pursue alternate theories to a high profile murder case. Together, they fight crime.

Yeah, I'm not even going to try to make a joke out of it this time. "Accidental Detective" is about as bog standard a buddy cop movie as you can get. Not that there's anything wrong with that. Clichés become clichés because they're appealing, after all. But since "Accidental Detective" can't exactly wow us with surprises when it comes to narrative construction, this movie's appeal is largely up to the cast.

Fortunately, they're pretty good. Sung Dong-il is really great as Tae-soo. In another movie, he'd be the loud seargent yelling at everyone to tell them what to do. But because of his bad political position, Tae-soo has been forced into having to conduct investigations by himself. There's the amusing implication that Tae-soo only tolerates Dae-man because the wannabe detective will allow Tae-soo to yell at him without complaint- just so long as they can continue the investigation together as a team.

Dae-man, for what it's worth, is helpful, but not that helpful. He makes the occasional clever observation. In a pinch that's all that's really needed to crack a case but in other instances, like the flooded basement, Dae-man is disastrously out of his depth (hoho). Really, both Dae-man and Tae-soo are only barely above average investigators. They attack the first idea they come up with, and whether this idea is actually any good or not is completely a matter of random chance.

The most competent character (not counting the villain) is actually probably Mi-ok. Multiple times she demonstrates deductive instincts that are just as good as Dae-man's, if not better. The sheer domesticity of their relationship is also a major highlight. Dae-man and Mi-ok always have to argue about who's taking care of the kids and when. Mi-ok constantly doubts how serious Dae-man is in his life goals- an impression that seems entirely reasonable considering that Dae-man is always defaulting to goofy schemes.

In all fairness the reason Dae-man does this is because whenever he asks for permission the other person usually just says no. Although I suppose there is a sort of chicken and the egg dynamic to that. Anyway, "Accidental Detective" is for the most part exactly what it sounds like- a pilot. Well, wait, I guess that only works with the Korean title, which just says Detectives: The Beginning. That's a bit of an odd marketing strategy, to emphasize how generic the movie is. Or was the production company hoping to build a franchise out of this one?