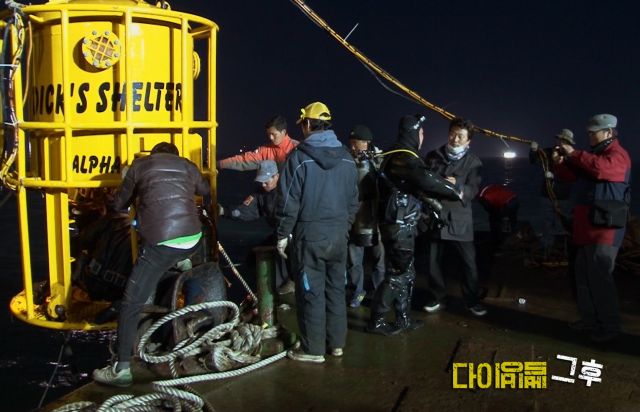 Director Lee Sang-ho had the good sense to realize that such a premise was just a tad narcissistic. It's quite awhile before we get to the controversy over the appearance of "The Truth Shall Not Sink with Sewol" at the 2014 Busan International Film. Even then that controversy is given short heft compared to the KOFIC blacklist scandal, which had apparently started under Lee Myung-bak's presidency.

That was the sort of factoid I found interesting her,- because I didn't know about those particular details. Unfortunately a lot of the rest of "After Diving Bell" is fairly rote. The basics of "The Truth Shall Not Sink with Sewol" are repeated in the opening segments, with new supplemental footage. None of the information is really new though, which is disappointing because you'd think some of that old unused video would seem more relevant in light of recent events.

Subsequent political attacks made against the principals involved with "The Truth Shall Not Sink with Sewol" have potential, but are ultimately left underdeveloped. One issue is that it's difficult to get all that worked up about the filmmakers' problems when we have family members of the Sewol survivors being hospitalized on-screen due to their hunger strike. Also a bunch of reactionary weirdos order pizza and have a picnic in front of the hunger strikers.

I had heard about that incident but had never seen the footage. Unfortunately that scene is too short, and too dependent on assumed knowledge to be all that interesting. Director Lee Sang-ho charges through disparate elements of the Sewol tragedy so quickly there's no time to put much thought into any individual event. Too much of the material is unfocused and even perfunctory. We get water hose footage, yet director Lee Sang-ho somehow manages to make police brutality look like an innocent rainstorm.

By contrast, just a couple of weeks ago "Intention" offered some very startling investigative findings about Sewol's suspicious navigation activity on the day of the tragedy. Even "The Truth Shall Not Sink with Sewol" itself was engaging mainly because it used the diving bell to issue as a metaphor for broader governmental failures in response to Sewol's sinking. The post-credits sequence of "After Diving Bell" promises to show us the result of an investigation about Choi Soon-sil that started all the way back in 2012. Now that's a movie I'd like to see. "After Diving Bell" by contrast, is at best a primer about Sewol's influence on domestic South Korean politics.

"After Diving Bell" is directed by Lee Sang-ho and narrated by Song Ok-sook.