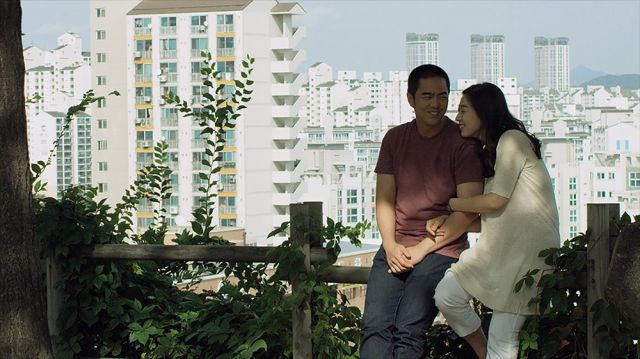 The three highlighted survivors in the "After Spring" omnibus embody haunted existences as they are trapped by memories of lost loved ones. Sin-ae (played by Jeon Mi-sun) lives in desperation for some means, any means, of seeing her daughter again to make right their strained final encounter. Sang-won (played by Yoo Jae-myung) lives in quiet terror of what he could not make right with his own daughter. Suk-ho (played by Jun Suk-ho) doesn't live at all- he barely even moves from the house, so paralyzed the man is by grief regarding his dead wife.

The sheer loneliness is palpable. Sang-won and Suk-ho do not have much in the way of friends or family. Sin-ae still has her husband, but they are constantly at odds over the question of how best to move on. The man ends up being absent anyway from the seemingly miraculous event that allows Sin-ae to gain closure. But it is only a seeming miracle since closure is non-existent for grieving family members.

Setting is critical as much as story here. All three lead characters live in these suffocating giant scale apartment buildings. The borderline identical appearance of the three homes does a lot to emphasize the sheer meaningless nature of their existence. The ghosts have a stronger stake in keeping the homes clean than the inhabitants do, because the living struggle to define an even basic purpose in life, instead just sulking constantly.

But don't let all this mislead you into thinking that "After Spring" is a depressing film. Far from it- accepting that a loved one is gone, and trying to see the positive in how they changed your life for the better, is very different than just wallowing in denial. The subtle distinction can be difficult to grasp. The obsession Sin-ae and Suk-hon feel toward the death of their loved one is a kind of permanent vigil to them. Their stories resolve by coming to terms with the reality that even in death, love implies a desire for recovery.

Sang-won's story moves along a different track entirely, and climaxes with a flashback explaining the source of his traumatic hallucinations. It's the most powerful moment in the film, emphasizing the helplessness a survivor feels at the brutality of the uncaring universe. Then there's the guilt felt at not being able to do more, and the despair in thinking about how much more terrifying that nightmarish moment must have been for the person the other side of the glass.

All the stories in "After Spring" are based on a specific recent tragic event in South Korean life- well, honestly, it's a few years removed at this point. Which is kind of the point. Time doesn't magically heal all wounds. There's still a scar and even if a survivor is able to pull themselves back together, that haunted memory lingers. There's a strong poignancy to that which allows "After Spring" to resonate as a story about surviving in general, rather than the specific cause of the trauma.