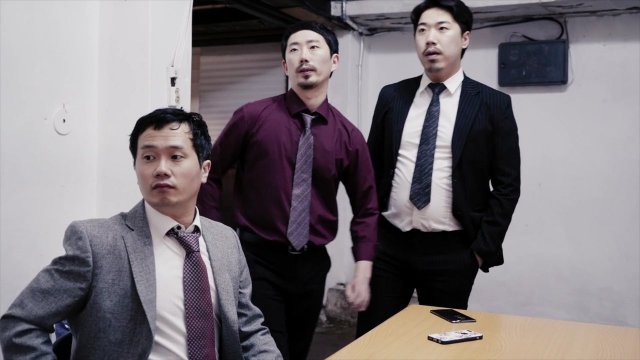 The first short of the "Ahn Sangtae Short Film Collection Vol.1" omnibus plays best to Ahn Sang-tae's natural strengths as a comedian. Undercover is about an undercover cop in a violent criminal gag who very stupidly gets his Kakao chat rooms confused and has to hypermasculine his way out of it. That Ahn Sang-tae does not look or act like either a credible cop or gangster only sharpens the absurd contrast of the situation, as his comically aggressive behavior inspires mild confusion but ultimate acceptance from his superiors.

The second short, The Pole isn't really a comedy persay. None of the rest of the short movies are really, which is why they're not as good, although 'The Pole' is the best of the bunch. It's about a housewife who takes up pole dancing. And it's cute, I guess, although the ending was a bit offputting just because the soundtrack was completely at odds with the music she's actually dancing to at the end. Also the housewife isn't pole dancing, which is equally odd.

In general "Ahn Sangtae Short Film Collection Vol.1" has fairly weak production values. I'm not sure how they were recording the voices but there's always a weird echo. They're perfectly watchable and I've definitely seen my fair share of short movies at film festivals with equally bad or even worse production values. It's just, those were not particularly good short movies, and I can only remember one or two of them because they had distinctive enough twists.

Which appropriately enough is also Ahn Sang-tae's strategy for the remaining pieces in this omnibus. Jeokgu is totally out of step tonally compared to the previous two shorts. Indeed, the tonal shift in the middle of the movie is such a deliberately jarring plot twist I can't actually describe it to you without ruining the entire movie. Although I can tell you this much- while scary and effective to start out with, there's no serious follow-up. And the second plot twist at the end was just silly.

Both are still better twists than Beast Talker, which I'm pretty sure was a machine translation gone wrong, with the intended title being Stalker but it's honestly hard to tell. The twist kind of makes it plausible, yet "Ahn Sangtae Short Film Collection Vol.1" is exactly the kind of low budget flick that would do a machine translation. Anyway, a woman is harassed for awhile then we get the twist. Yep, not much to say there.

Nor is there much to say about the final movie, Synchro Man, which is the longest and most involved story of the bunch yet also the most boring. It's about some guy who does crimes with...mental synchronization? I mean, sure? Except that much like a previous story in the omnibus that involved crime, without clear motivation it's hard to get invested in a character. This is why Undercover was so good while the rest of the omnibus falls flat. The premise is set up quick, then we dive right into the funny.