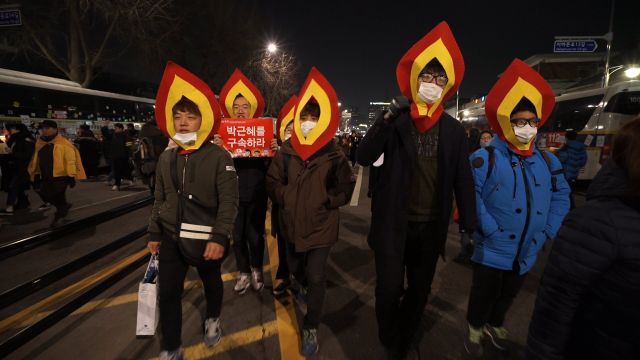 The Gwanghwamun Candlelight Rallies were mass protests every Saturday from late 2016 to early 2017 demanding the removal of President Park Geun-hye from office. The first short docuemntary of the "All Day Candles" omnibus, "Square@People" (directed by Kim Hwan-tae) is a dialog between two organizers of the Candlelight Rallies explaining the origins of the rallies, and relating the rise of the rallies to ongoing political events at the time.

Interspersed between segments of this interview is ongoing footage from the rallies. On one end this is very much in the spirit of the documentary's tone, which is to emphasize the collective nature of the event. The problem is that the main obviously noteworthy aspect of the rallies was their sheer scale. This is easily gotten across in a few pictures. But it gets to be exhausting repeatedly watching footage that just sort of blends together.

This issue would not have been so pronounced except that the second film of the omnibus, "At The Square" (directed by Choi Jong-ho) just consists entirely of this increasingly indistinguishable footage. As useful as on the ground documentation is, after a certain point we're not actually watching a movie at all. We're just watching the rally itself play out in real time, with minimal effort being made toward editorial statement. I mean yeah, the political intent is obvious when there's whole setpieces involving people carrying a giant cage with former president Park Geun-hye's likeness inside.

But everyone knows that part. I was disappointed more detail wasn't paid to the more obscure trivia of the rally- like how technically the Candlelight Rallies were a continuation of a memorial service for a labor activist. The spillover compounded as the Choi Soon-sil scandal advanced in the press. I rather liked how "Square@People" took Park Geun-hye's news appearances and scribbled out in subtitles which words were obvious lies that only served to make people increasingly angry.

"Everyday Candlelight" (directed by Kim Su-mok) has the most personal context of the three. That documentary has footage of the Candlelight Rallies like the others, but it's interspersed with interviews where normal citizens explain their general frustrations with the conservative government. What's most intriguing about these interviews is the skepticism expressed about whether the situation will actually improve once Park Geun-hye is gone. These are people with little to no trust in their government.

Given the problems discussed in regards to labor rights, unsafe working environments, or the ways capitalism implicitly works against free speech, it's easy to see why these people are so doubtful as to the prospect of meaningful change. And yet they tried anyway. Even if it was only for a moment, people went to the Candlelight Protests and were able to vent their anger. They cried among friends about hardships they had, up until that point, had a great deal of trouble voicing. While "All Day Candles" lacks the punchy focus of "Candle in the Wave" the documentary is nonetheless a treasure trove of information about modern South Korean politics, andis absolutely worth watching should you ever get the chance.

"All Day Candles" is directed by Choi Jong-ho, Kim Hwan-tae and Kim Su-mok.