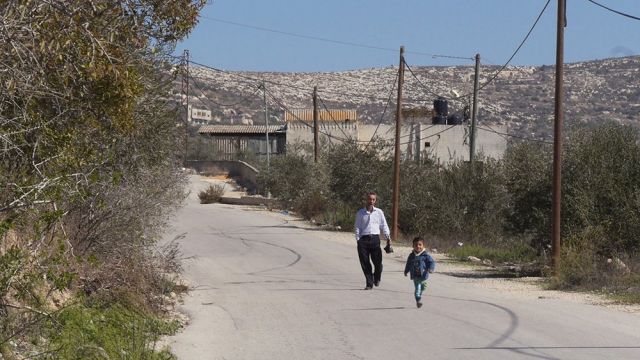 You've probably heard that Israel is the ancestral homeland of the Jewish people, their originally having had a nation state there a few thousand years ago. What tends to get less press are the people who have been living there ever since the Jews left. And who are, somewhat awkwardly, still living in the area as the Israeli government slowly tries to take over their territory, while still paradoxically agreeing that, on the private level, much of this land has been owned for generations by Palestinians who are not Israeli citizens.

That's the Kafkaesque situation depicted in "All Live, Olive" wherein olive farmers must apply for passes to go to their own land and harvest their olives, which are then processed into products with the label "made in Israel" attached. I imagine everyone's quite familiar now with the human rights issues in Palestine. If nothing else, "All Live, Olive" definitely brings something new to the discussion just by emphasizing the pointlessly inconvenient bureaucracy that seems specially designed to bully the landowners into selling their olive farms to Israelis.

But wait, you might be asking, isn't there a legitimate security risk, what with Palestinian terrorists? That's an obvious question although directors Ju Ro-mi and Kim Tae-il never get around to asking it. That's mostly because such a question is redundant. While the community members we see in "All Live, Olive" are bitter and angry, they're mostly bitter and angry about the looming possibility that they won't be able to leave anything to their children.

When that motivation is kept in mind, there's really no benefit for them to get into a war where their possessions will be lost. We only see one scene of immediate violence in "All Live, Olive", and it's prompted by the appearance of a bulldozer- a machine that exists for the sole purpose of destroying property. Considering the camera constantly focuses on the aftermath of such violence in the past, it's little surprise that mere bitterness turns into rage when the prospect of more violence should reappear right in front of them.

To people like this, distinctions about whether the Israeli government has the technical legal right to enforce checkpoints, seize territory, and tear buildings down are meaningless. Indeed, they dislike the Palestinian Authority for these same reasons- as far as they can tell it's just another pointless bureaucracy that makes life inconvenient. At best the Palestinian Authority just makes international headlines, usually in unhelpful ways.

"All Live, Olive" is the latest in an increasing trend of Korean documentary directors taking their cameras and traveling worldwide in search of solidarity, and other oppressed peoples, so that they may listen to their stories. One analogy I rather liked, if unelaborated, was a man asking the filmmakers how they would feel if Japan was still in Korea, pushing Koreans around and telling them what to do. It's distressing to think that the West Bank occupation has managed to last longer than the Japanese occupation of Korea, with no end in sight.

"All Live, Olive" is directed by Ju Ro-mi and Kim Tae-il.