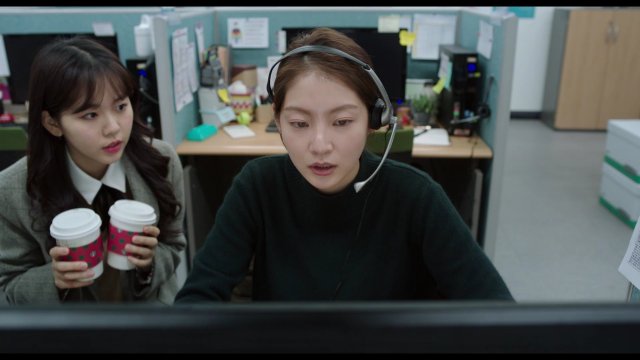 Jin-ah (played by Gong Seung-yeon) is very accustomed to and comforted by a functionally antisocial routine. This fact takes on a certain irony once "Aloners" makes it clear that Jin-ah works at a customer service call center, and that she's the resident ace of the team, able to resolve customer complaints quite quickly no matter how ridiculous and pointless they may be. Jin-ah has a very effectively robotic manner of caring- a pretense promptly dropped any time she's not on the phone.

"Aloners" doesn't really have any functioning story or narrative to speak of. Director Hong Sung-eun does threaten to have a plot happen at some points, but all these moments drift on into nothingness. Jin-ah has non-existent relationships with her neighbors, an unwanted apprentice at work, and an unwanted father who doesn't realize she can see his every move. Jin-ah chooses not to engage with these people, because she prefers to be alone.

As a character study "Aloners" is genuinely fascinating. Jin-ah makes no apologies for her own behavior in person, while constantly making meaningless disaffected apologies to customers over the phone. We never get the impression that Jin-ah's lifestyle is really wrong. In a way her aloofness is a bit inspiring. Jin-ah's behavior to her father may seem cruel, but what kid really wants to be dragged to religious outings with their old, lonely parents?

While the entirity of the movie is from Jin-ah's perspective there's also worthwhile subtext in how her more socially inclined peers are presented. We can see Jin-ah's genuinely pathetic father wallow in guilt because he feels like a failed husband and wants to make up for that by being an attentive dad. Jin-ah's apprentice wants to make friends, and is incapable of insincere apologies. And as for Jin-ah's neighbor, well, he just wants to be a neighbor, with the bare minimum social interaction implied by that.

"Aloners" isn't as strong when it moves into the climax because at that point we start to get the sense that Jin-ah's lifestyle is wrong, although director Hong Sung-eun never goes so far as to say it is wrong. We see Jin-ah maintain the same aloofness. There's just more of a sense of remorse on her part, as Jin-ah seems to realize it's not unreasonable for other people to want social interaction even if she personally doesn't much care for the idea. Where Jin-ah will go, and what she's planning to do, remains a mystery by the movie's end.

Movies tend to be reflections of our own values, with people liking any given movie depending on whether they find its perceived values to be agreeable. "Aloners" is more explicit than most as it's explicitly a film about the heroine being a working stiff who is for various reasons forced to talk to other people and better at being a cog in the system when she doesn't just emotionally engage at all. Jin-ah is not a pitiable character, and she has trouble understanding why anyone else would want to be one.