[HanCinema's Film Review] "Along With the Gods: The Last 49 Days" 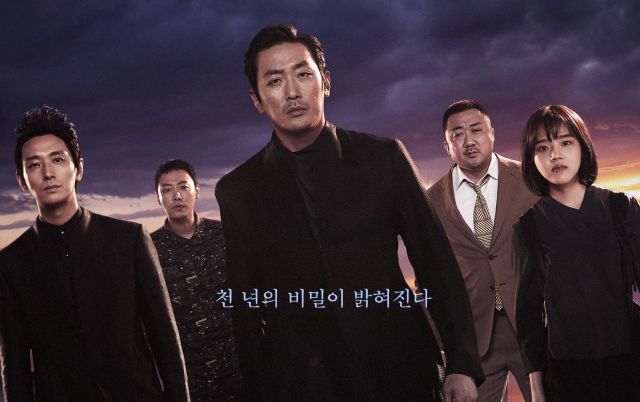 While taking place immediately after the conclusion of "Along With the Gods: The Two Worlds" it soon becomes clear that "Along With the Gods: The Last 49 Days" has surprisingly little to do with the first movie's premise. I mean sure, Kang-rim (played by Ha Jung-woo), Seaman Mac (played by Ju Ji-hoon), and Deok-choon (played by Kim Hyang-gi) are still heralds who negotiate lost souls into their proper berth in the afterlife. But their new charge Soo-hong (played by Kim Dong-wook) is a sharp cookie who quickly notices the ethical inconsistencies in Kang-rim's legal advocacy.

Mind, I shouldn't overemphasize Soo-hong's importance as a character. On balance we actually got more exposition about him in "Along With the Gods: The Two Worlds" as disproportionate screentime here is instead focused on the Goryeo backstory of the three heralds. The result is that "Along With the Gods: The Last 49 Days" plays out more like a classic costume drama where the framing device happens to involve a complex computer graphics enabled afterlife.

Also there are a lot of scenes with household god Joo-sin (played by Ma Dong-seok) in the modern day. Joo-sin is mostly just a vehicle to deliver exposition to the relevant heralds. In an odd turnabout, Joo-sin's story of protecting an elderly man from heralds is largely played for dark comic relief. The social commentary is not subtle. Eminent domain laws, loan sharks, and mutual funds are constantly invoked to establish a theme of how hell on earth was created by humans, for humans.

At least, that's the impression I got from the backstories. It turns out that as mortals Kang-rim, Seaman Mac, and Deok-choon were all living in times of war and were forced, for reasons good or bad, into fighting a losing battle against the powers that be in the sake of some larger noble goal. The grimness of the day to day life contrasts with the doomed objective, insinuating that the constant struggle was at all times meaningless against the power of fate.

There's a very operatic quality at play here. I don't necessarily mean that as a compliment. Sure, operas are these epic struggles between larger than life characters whose actions affect the course of empires. At the same time, operas can be incredibly dull because extended foreign music that constantly iterates the same point with little progress can be, well, pretty boring at times.

I'm actually kind of tempted to spoil the big twists, though, because like opera "Along With the Gods: The Last 49 Days" isn't supposed to be centered around the plot. The movie is instead anchored by its performances, reactions, and most importantly, its very unsubtle moral message about why humanity entertains itself with stories of an afterlife with infinite suffering. Because really, any kind of afterlife involves infinite suffering. Consciousness in such a state of existence means constant regret, because with time to ruminate over past failures means neverending realizations about what should have been done, realizing in the present that death was inevitable. Compared to that, oblivion is a mercy.

"Along With the Gods: The Last 49 Days" is directed by Kim Yong-hwa and fetaures Ha Jung-woo, Ju Ji-hoon, Kim Hyang-gi, Ma Dong-seok, Kim Dong-wook and Do Kyung-soo.

"[HanCinema's Film Review] "Along With the Gods: The Last 49 Days""
by HanCinema is licensed under a Creative Commons Attribution-Share Alike 3.0 Unported License.