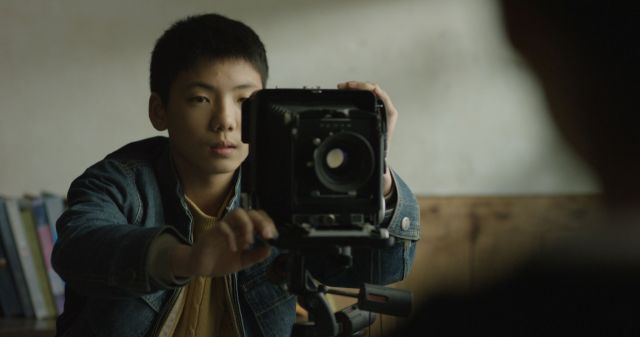 In a small town near the demilitarized zone the economy is dictated almost entirely by the spending habits of American soldiers, an "America Town" if you will. The actual name of the town is not important because there were a lot of them back in the eighties. Some of them are still around even today. They're a bit of a wasteland really, which is unavoidable. Imagine you're a bored, lonely, depressed American soldier with a paycheck and nowhere better to go with your time off base. What would you buy?

When the movie has started the "America Town" has already been there several decades, even though from our vantage point, this is a retrospective movie. Children have grown up there. It's not a good environment but then the whole problem is that this is a town filled with people with nowhere else to go. Imagine being a woman who works at one of those sultry bars. That's not the kind of work anyone goes into by choice, at least not at wages that bad.

This is the context in which I like to look at the venereal disease subplot, which eventually ends up taking over the entire movie. Where the venereal disease came from isn't really all that important. Metaphorically I can see it sprouting like a flower from the collective misery of the town. If alcoholism and drug abuse are slow-acting suicide, venereal disease is just a means by which the process can be sped up.

That sex is also a means of expressing sincere affectation, instead of the cheap equivalent the American soldiers so desperately abuse in a feeble effort to maintain their sanity, is just another sad cheap joke being made at the expense of the town's inhabitants. As the town's de facto photographer, young Sang-gook (played by Kim Dan-yul) knows what sex is. But ignorant as to the reality of what the damage it does to the psyches of the adult characters...well, let's just say that particular storyline does not end well.

No doubt I have by now made "America Town" sound very fantastically depressing and it is. But the creepiest part is just how abstract the feeling is. Because all of the characters are trapped by situations they can't control, the depressive lack of emotional agency is also imparted to the viewer. So when the misery meets a crescendo and we finally find out what the monkey house is, Sang-gook is once again our perspective character, staring ahead in mute, helpless horror.

Incidentally I rather wish "monkey house" had been worked into the title somehow, because long before we get to that point, that's what "America Town" feels like. We're watching monkeys, not humans, and on the rare occasion one gets a glimmer of intelligence and starts to think about a better future, that's the moment the monkey trainer comes in and starts hitting everyone with a monkey prod. On one end I think, those poor monkeys. And on the other? I'm sure glad that wasn't me.