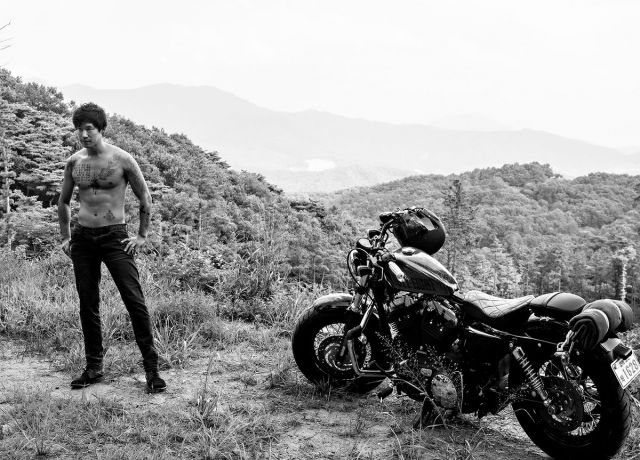 The painter (played by Yu Jun-sang) isn't actually all that angry. It's a fact that confused me throughout most of "Angry Painter". Yu Jun-sang is a very capable actor who can play with a very wide range of emotions. And yet no matter what the painter does, be it painting or cooking or paying condolence visits or witnessing crime scenes or brutalizing rapists or engaging in mortal street fights or even just carving up some meat, Yu Jun-sang just maintains the same generally blank expression.

"Angry Painter" alternates between sadistic violence, weak catharsis and mostly normal everyday life without ever actually changing the tone in such a way to suggest that these are all different somehow. For the painter, of course, this is just another totally normal day. It's a normalcy that gets to be a bit comical after awhile because how exactly does he manage to keep finding rapists? Do the painter and/or the driver (played by Moon Jong-won) have some sort of rapist-detection device?

Alas, the basic mysteries regarding these two are never really that well-explored. There's little plot to speak of, except for an international romance involving the driver. It's kind of dirty because of the prostituion aspect, kind of touching because of the sweet nothings, and kind of perplexing because it's not clear how much these two actually understand each other. Note that since the "Angry Painter" as a whole is generally wordless, the random philosophical ramblings about nothing are probably even more pointless than they might initially seen.

All of this is almost certainly deliberate, for whatever that's worth. Director Jeon Kyu-hwan treats the proceedings in such a belaboured manner that after a certain point the real mystery is just trying to figure out why exactly this movie was made in the first place. As an Estonian co-production, my first thought was that the Estonian Film Commission was involved. But then when we see Estonia it's not exactly a very touristy destination. And also the Estonians speak English, sometimes even with each other.

That wasn't the most relevant commentary but that's really the best way to describe "Angry Painter" as a whole- it's commentary that's lacking in obvious relevance. The narrative jumps and starts without ever actually going anywhere. If not for the editing this could easily be an omnibus of vignettes where the only connecting thread is that the painter is involved somehow. That, and the occasional burst of sex and/or violence coupled with the general lack of anger.

I didn't really get "Angry Painter". Be that as it may, director Jeon Kyu-hwan has managed to make an audience for himself with these weird, explicitly symbolic yet apparently pointless films, and I doubt that "Angry Painter" will be any kind of disappointment to his fans. At bare minimum the proceedings were clearly enough explained and made enough sense that I, at least, was never particularly angry. In that sense the final shot, which takes place at the end of a scene which didn't actually resolve that much, really says all that needs to be said. What were you expecting?